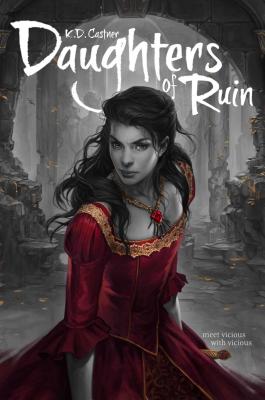 Game of Thrones meets Graceling in a thrilling debut that follows the four fierce princesses of enemy kingdoms as their worlds collide in the throes of war.

Not long ago, a brutal war ravaged their kingdoms, and Rhea’s father was the victor. As a gesture of peace, King Declan brought the daughters of his rivals to live under his protection—and his ever-watchful eye. For ten years the girls have trained together as diplomats and warriors, raised to accept their thrones and unite their kingdoms in peace.

But there is rarely peace among sisters. Sheltered Rhea was raised to rule everyone—including her “sisters”—but she’s cracking under pressure. The charismatic Cadis is desperately trying to redeem her people from their actions during the war. Suki guards deep family secrets that isolate her, and quiet Iren’s meekness is not what it seems.

All plans for peace are shattered when the palace is attacked. As their intended futures lie in ashes, Rhea, Cadis, Suki, and Iren must decide where their loyalties lie: to their nations, or to each other.

Praise For Daughters of Ruin…

"[A] read-alike for Game of Thrones, with an actual body count."
— Kirkus Reviews

"This should appeal to readers who like the novels of Sarah J. Maas and Kristin Cashore."
— Booklist

K.D. Castner was once a farmer, once in love, and three times almost died in water. K.D. makes blackberry cider and dotes on a passel of grandkittens. A US citizen, she makes her home in Aberystwyth, Wales. Daughters of Ruin is her first novel.
Loading...
or
Not Currently Available for Direct Purchase