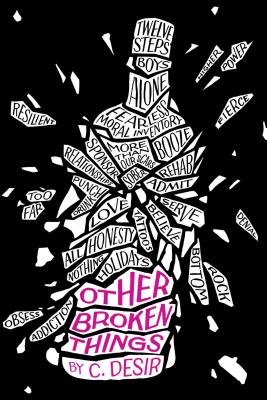 From the author of Bleed Like Me, which Booklist called “edgy, dark, and turbulent with passion” comes another compelling and gritty novel about addiction and forbidden romance—starring a fearless, unforgettable heroine.

Unfortunately, her old friends want the party girl or nothing. Even her up-for-anything ex seems more interested in rehashing the past than actually helping Nat.

Nat’s connection to Joe is overwhelming, but so are her attempts to fit back into her old world, all while battling the constant urge to crack a bottle and blur that one thing she’s been desperate to forget.

Gr 9 Up—Seventeen-year-old Natalie's story starts with"I'd cut a bitch for a cigarette," hooking readers immediately. Inthis gritty and honest tale, Nat's struggle with sobriety starts withcourt-ordered AA meetings and community service after a DUI incident. She is afighter, literally. Her parents' demand that she quit boxing leads to herdrinking. Nat fills the holes in her life with booze and sex. Without anaddiction, she feels lost. Enter Joe, the sexy, 30-something would-be sponsorNat bums cigarettes off of during meetings. Though Joe tries to shut down Nat'soutrageous flirting, the sexual tension is palpable, foretelling the inevitabletrain wreck. Desir writes the relationship as an ill-fated May/December romancebetween two addicts. If Nat and Joe do not have alcohol, they will findsomething else to quench their needs. In this case, they find each other, untilthat implodes. While this situation lends itself to controversy, it alsoinvites conversation. Other plot threads—losing friends and reuniting withothers, relapses, and Natalie's parents' rocky marriage—round out therecovering addict's experience. Facing her demons, Nat evolves from arightfully angry teen to a wiser, emotionally stronger young woman able tostand on her own without a man or alcohol, and readers will cheer for hersuccess. Not for the faint of heart (Joe's rock bottom story involves a deadhooker), Natalie's story is told without judgement and with an uncannyunderstanding of the 12-step program. This is sure to appeal to fans of NicSheff's Tweak (S. & S., 2008), Koren Zailckas's Smashed (Viking, 2005), andthe-like. VERDICT This title deserves a place on high school shelves.—LauraFalli, McNeil High School, Austin, TX
— School Library Journal

"Fans of A. S. King, Laurie Halse Anderson, and John Green will appreciate this gritty, honest portrayal of the road to recovery."
— VOYA

C. Desir writes dark contemporary fiction for young adults. She lives with her husband, three small children, and overly enthusiastic dog outside of Chicago. She has volunteered as a rape victim activist for more than ten years, including providing direct service as an advocate in hospital ERs. She also works as an editor at Samhain Publishing. Visit her at ChristaDesir.com.
Loading...
or
Not Currently Available for Direct Purchase