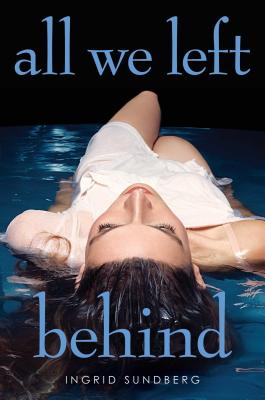 All We Left Behind

For fans of Simone Elkeles and Courtney Summers, this haunting debut novel is about two teenagers battling their inner demons as they fall in love for the first time.

When Marion Taylor, the shy bookworm, meets sexy soccer captain Kurt Medford at a party, what seems like a sure thing quickly turns into a total mess. One moment they’re alone in the middle of a lake, igniting sparks of electricity. The next, they’re on dry land, pretending they’ve never met. But rather than the end, that night is the beginning of something real, terrifying, and completely unforgettable for them both.

As Marion and Kurt struggle to build a relationship from the fractured pieces of their pasts, every kiss they share uncovers memories both would rather keep buried. Marion desperately wants to trust Kurt and share the one secret she’s never told anyone—but some truths aren’t meant to be spoken out loud. Kurt is also still haunted by his mother’s death, by the people he hurt, and by the mistakes he can never take back.

Explosive together and hollow apart, Marion and Kurt seem totally wrong for each other—but could they turn out to be more right than they ever thought possible?

Praise For All We Left Behind…

"Ingrid Sundberg has a rare talent for writing heartfelt stories that readers will sink into. Powerful and poignant, honest and tender, with beautifully textured characters, All We Left Behind is a gem of a book."
— A.M. Jenkins, author of Printz Honor Book REPOSSESSED

“The heart of this book lies in its wonderfully complex characters. Sundberg is a master at crafting flawed, vulnerable, realistic characters. Each moment, each thought feels honest and deliberate, and as a result there is such life in the pages, an almost intangible ache that lives between each careful word. All We Left Behind perfectly pinpoints what it is to be a teenager today. To search for a straight path in a crooked and confusing world.”
— -Cora Carmack, New York Times and USA Today Bestselling Author

"A realistic love story about two broken pieces and their struggle to become whole. Artfully crafted, All We Left Behind guarantees that Ingrid Sundberg's name is one you won't soon forget."
— - Julie Murphy, #1 New York Times bestselling author of DUMBLIN'

Two teens who seem totally wrong for each other find that they are actually quite right in this heartfelt and gritty debut told through alternating first-person points of view. Kurt and Marion, both 17, don’t have much in common. Kurt is popular, outgoing, and has a

reputation with the girls as a “player.” Marion is a bit of a wallflower and is unable to tell anyone about something that happened to her years before. Both cope with their dysfunctional families in different ways: Kurt’s sister is a meth addict, and he uses sex to fill the void he feels over his alcoholic mother’s death, while Marion is disconnected from even those closest to her. Throughout, lyrical water

Ingrid Sundberg holds an MFA in writing for children from Vermont College of Fine Arts and an MFA in screenwriting from Chapman University. She grew up in Maine, but now lives in sunny California where she misses the colors of autumn. All We Left Behind is her first novel. Find Ingrid online at IngridSundberg.com.
Loading...
or support indie stores by buying on