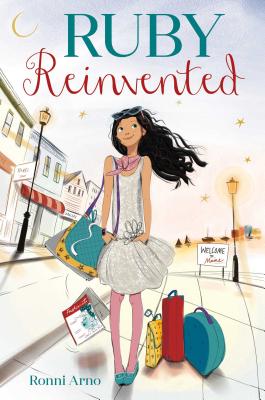 When Ruby flees Hollywood to escape the fame of her parents, she tells a lie that could ruin the life she loves at her new boarding school in this M!X novel about courage, families, and finding your own spotlight.

Ruby Miller has it made. As the only child of model-turned-TV-host Celestine Cruz and pro-baseball star Zack Miller, she has everything a twelve-year-old girl could want. Well, except for real friends.

After a disastrous birthday party where she discovers her supposed BFFs are only friends with her because her parents are uber-famous, she finds a place as far from fake and phony Hollywood as she can get: a boarding school in Camden, Maine. In her desperation to distance herself from her star-studded parents and the paparazzi who trail them, Ruby tells her new friends that she’s an orphan. She feels awful about lying, but once she starts, it’s hard to come clean. Plus, now that nobody’s comparing her to her perfect parents, Ruby can finally let her own talents as a dress designer take center stage.

When Ruby finds herself connecting with a cute boy who really did lose his parents, she’s torn between who she is and who she’s pretending to be. And with Parents’ Weekend approaching, she must find a way to keep her secret—without losing her new best friend, the trust of her first crush, and the chance to shine as the designer of her very own fashion show.

Ronni Arno Blaisdell is the author of Ruby Reinvented. She has written for several magazines, blogs, and websites. In a previous life she worked as a publicist in Hollywood, and eventually built a home in Maine. She is a keen SCBWI member and contributor to the KidLiterati.com blog.
Loading...
or
Not Currently Available for Direct Purchase