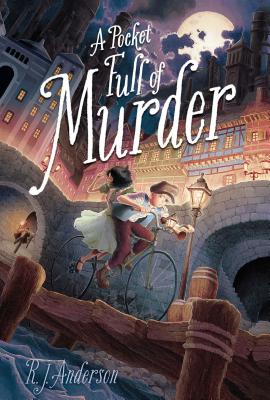 A Pocket Full of Murder

A determined young girl joins forces with an adventure-loving street boy to save her father’s life in this “thoroughly entertaining” (Kirkus Reviews) magical murder mystery.

In the spell-powered city of Tarreton, the wealthy have all the magic they desire while the working class can barely afford a simple spell to heat their homes. Twelve-year-old Isaveth is poor, but she’s also brave, loyal, and zealous in the pursuit of justice—which is lucky, because her father has just been wrongfully arrested for murder.

Isaveth is determined to prove his innocence. Quiz, the eccentric, eyepatch-wearing street boy who befriends her, swears he can’t resist a good mystery. Together they set out to solve the magical murder of one of Tarreton’s most influential citizens and save Isaveth’s beloved Papa from execution. But is Quiz truly helping Isaveth out of friendship, or does he have hidden motives of his own?

Praise For A Pocket Full of Murder…

"Isaveth and her sisters are an appealing bunch, and the plot's twists and turns keep readers enjoyably perplexed…Thoroughly entertaining."

“An appealing novel for readers who like fast-paced fantasy with a dash of mystery and a political angle.”
— School Library Journal

“From the dynamic cover…to the twisty ending, this has fullness and depth unusual in middle-grade mysteries... Anderson still leaves plenty of room for magic, adventure, and the development of her two strong, young main characters, who match each other in both wits and sensitivity.”
— Booklist, STARRED REVIEW

R. J. (Rebecca) Anderson is the author of several acclaimed books, including the teen thriller Ultraviolet, which was shortlisted for the Andre Norton Award, and the UK bestselling Knife series for middle grade readers. Her love for the Golden Age detective novels of Dorothy L. Sayers and Margery Allingham, along with a lifelong delight in fantasy and adventure stories, inspired her to write A Pocket Full of Murder and its companion A Little Taste of Poison. She lives with her husband and three children in Stratford, Ontario, Canada. Visit her at RJ-Anderson.com.
or
Not Currently Available for Direct Purchase