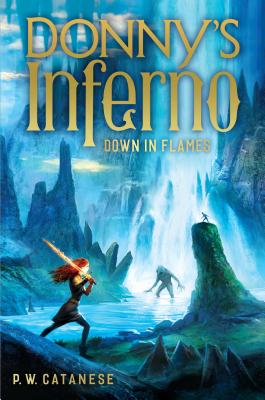 Down in Flames (Donny's Inferno #2)

From award-winning author P.W. Catanese comes the second fast-paced thriller about a twelve-year-old boy who must protect the kinder, gentler underworld from returning to its previous terrifying incarnation.

After being rescued from a fiery death by Angela Obscura, an ancient demon from the underworld, Donny Taylor is settling into a new home in Sulfur.

Life as Angela’s mortal assistant isn’t so bad. Donny gets to travel to exotic places through fire portals, money is no object, and he’s seeing amazing things that few mortal boys have ever laid eyes on. Plus Angela is fun to be around. What’s not to like?

Well there is one minor detail. Being Angela’s assistant has almost gotten Donny killed a few times already. And Angela doesn’t seem to take his worries very seriously. After all, she may look like a beautiful human, but she’s a demon and hard to kill. Donny, however, is all too vulnerable. When another encounter with a horrific underworld monster nearly gets him devoured, he’s starting to wonder if he should find a way out of the whole situation.

Then the king of the underworld’s ferrymen gives Angela and Donny a mission. Souls are disappearing before they reach Sulfur. But who’s taking them, and why? Their quest takes the pair on another globe-hopping adventure, where they join forces with a charming old friend of Angela’s named Fiasco.

When Donny finds himself in danger yet again, it’s finally time to decide: Should he help Angela pursue this mystery to its shocking conclusion? Or should he plan his escape to a normal mortal life, before it all goes down in flames?

Praise For Down in Flames (Donny's Inferno #2)…

A satisfying sequel sure to please readers of the first book, in a series that appeals to fans of the tones struck by Rachel Renée Russell and Rick Riordan.
— School Library Journal

With short chapters and fast-paced action, this is another suspenseful read. The author's worldbuilding continues to be impressive. The duo's travels through the underworld allow plenty of opportunity for Catanese to describe its sights and sounds, and they visit some interesting parts of the human world as well: Old San Juan and Bayamón in Puerto Rico and Varosha in Cyprus. . . . Second in a series that promises continued terror and delight.
— Kirkus Reviews

Catanese’s descriptive yet compact prose moves story and action along at a clip. He is good at creating fun but creepy locations and quirky characters, and the fight scenes are successful without being gory.
— Booklist