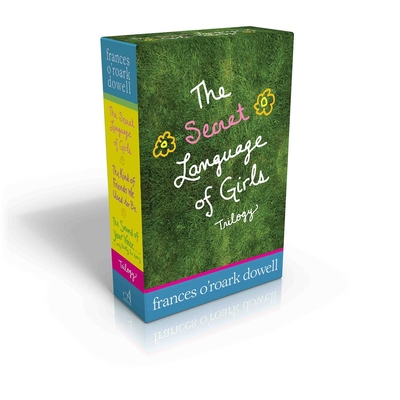 The Secret Language of Girls; The Kind of Friends We Used to Be; The Sound of Your Voice, Only Really Far Away

Middle school friendships can be complicated, but if anyone understands the secret language of girls, it’s bestselling author Frances O’Roark Dowell in this collectible boxed set of a perceptive and relatable trilogy.

Marylin and Kate used to be best friends, but middle school has a funny knack for getting in the way. Can two girls who grew up together, but have vastly different interests, stay friends forever?

This boxed set of Frances O’Roark Dowell’s widely praised trilogy includes all three installments of Marylin and Kate’s rollercoster friendship: The Secret Language of Girls, The Kind of Friends We Used to Be, and The Sound of Your Voice, Only Really Far Away.

Frances O’Roark Dowell is the bestselling and critically acclaimed author of Dovey Coe, which won the Edgar Award and the William Allen White Award; Where I’d Like to Be; The Secret Language of Girls and its sequels The Kind of Friends We Used to Be and The Sound of Your Voice, Only Really Far Away; Chicken Boy; Shooting the Moon, which was awarded the Christopher Award; the Phineas L. MacGuire series; Falling In; The Second Life of Abigail Walker, which received three starred reviews; Anybody Shining; Ten Miles Past Normal; Trouble the Water; the Sam the Man series; The Class; and most recently, How to Build a Story. She lives with her family in Durham, North Carolina. Connect with Frances online at FrancesDowell.com.
or
Not Currently Available for Direct Purchase
Copyright © 2020 American Booksellers Association