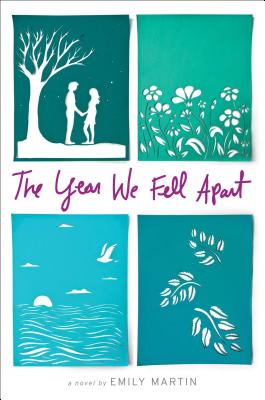 The Year We Fell Apart

In the tradition of Sarah Dessen, this powerful debut novel is a compelling portrait of a young girl coping with her mother’s cancer as she figures out how to learn from—and fix—her past.

Few things come as naturally to Harper as epic mistakes. In the past year she was kicked off the swim team, earned a reputation as Carson High’s easiest hook-up, and officially became the black sheep of her family. But her worst mistake was destroying her relationship with her best friend, Declan.

Now, after two semesters of silence, Declan is home from boarding school for the summer. Everything about him is different—he’s taller, stronger…more handsome. Harper has changed, too, especially in the wake of her mom’s cancer diagnosis.

While Declan wants nothing to do with Harper, he’s still Declan, her Declan, and the only person she wants to talk to about what’s really going on. But he’s also the one person she’s lost the right to seek comfort from.

As their mutual friends and shared histories draw them together again, Harper and Declan must decide which parts of their past are still salvageable, and which parts they’ll have to let go of once and for all.

In this honest and affecting tale of friendship and first love, Emily Martin brings to vivid life the trials and struggles of high school and the ability to learn from past mistakes over the course of one steamy North Carolina summer.

Praise For The Year We Fell Apart…

"The Year We Fell Apart is a poignant and aching tale of childhood love, loss, and the chances we get to try again. I was holding my breath page after page, hoping upon hope that Harper and Declan would find their way back into each other’s hearts."
— Jaye Robin Brown, author of NO PLACE TO FALL

“A relatable story about choices and their consequences that will not disappoint fans of Sarah Dessen and Melissa Walker.”
— School Library Journal

“Martin's insight into the teen psyche is spot-on.”
— Kirkus

"In a story about forgiveness and survival, debut author Martin takes on tough issues like the fragility of girls’ reputations and the fear of potentially losing a parent."
— Publishers Weekly

This moving narrative is told through the past and present of a high-school junior. It explores motive and distance in relationships and the effects of sickness on a family. The subject matter should be inescapably miserable, but Martin seamlessly infuses humor, wit and nostalgia, bringing fun into an otherwise sad story.
— RT Magazine

Emily Martin grew up in a suburb of Detroit, Michigan. She attended graduate school in North Carolina, where she fell in love with sweet potato pancakes, deep fried pickles, and the boy who later became her husband. Emily now lives and writes in Boston, Massachusetts. The Year We Fell Apart is her first novel. You can find Emily online at EmilyMartinWrites.com, or follow her on Twitter @ThatEmilyMartin.
Loading...
or
Not Currently Available for Direct Purchase