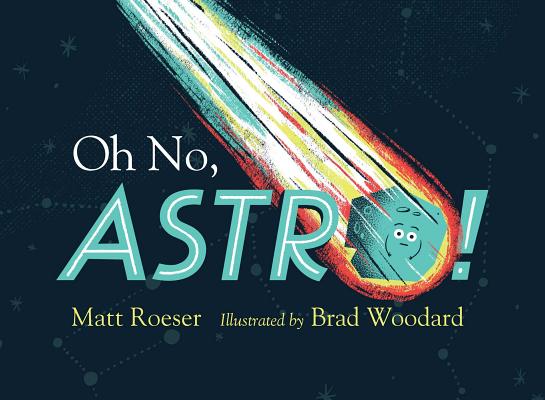 Asteroids! Planets! Astronauts!
In this charming debut picture book, a grumpy asteroid named Astro is thrown out of orbit and takes an unexpected journey through space!

Astro is a cranky asteroid who just wants everyone to respect his personal boundaries. But when a satellite knocks Astro out of orbit, he is forced to embark on an epic adventure through space…whether he wants to or not!

Filled with playful illustrations and tons of cool facts about space, this picture book is a must-have for all the future astronauts who are ready to journey through the galaxy.

Praise For Oh No, Astro!…

"Informative, dynamic, rich in vocabulary, and quite funny."
— Kirkus Reviews

"On the first read-through, some of the physics involved may be a bit complex for younger readers, although a spread of “Space Facts” at the end will help clear up lingering questions and perhaps pique the interest of would-be scientists. But this won’t keep even the most science-averse young readers from enjoying the unamused Astro’s voyage through the galaxy, or from demanding another read."
— Booklist

Matt Roeser has never been to outer space, but he has eaten astronaut ice cream. When not dreaming of exploring the cosmos and writing books, he’s busy eating non-astronaut food and designing book covers. Even though his favorite planet is Saturn, he currently lives on Earth in a town called Boston, Massachusetts. Oh No, Astro! is his first book. Visit him at MattRoeser.com.

Brad Woodard is always looking to explore new things. Even though his adventures have only been on Earth, he loves to draw and read about outer space. He is also the illustrator of Tatay’s Gift, written by his wife Krystal Woodard. Brad lives in Austin, Texas, where he enjoys stargazing with his wife, son, and puppy. Learn more at BravetheWoods.com.
Loading...
or
Not Currently Available for Direct Purchase