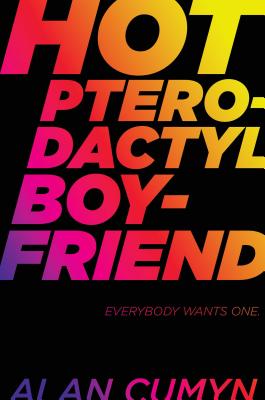 Prepare to be blown away—or rather, carried away on huge muscular wings—by this blissfully outlandish, bracingly-smart, tour de force about a teen who has to come to terms with relinquishing control for the first time as she falls for the hot new…pterodactyl…at school. After all, everybody wants him!

Shiels is very pleased with her perfectly controlled life (controlling others while she’s at it). She’s smart, powerful, the Student Body Chair, and she even has a loving boyfriend. What more could a girl ask for?

But everything changes when the first-ever interspecies transfer student, a pterodactyl named Pyke, enrolls at her school. There’s something about him—something primal—that causes the students to lose control whenever he’s around. Even Shiels, the seemingly perfect self-confident girl that she is, can’t keep her mind off of him, despite her doting boyfriend and despite the fact that Pyke immediately starts dating Jocelyn, the school’s fastest runner who Shiels has always discounted as a nobody.

Pyke, hugely popular in a school whose motto is to embrace differences, is asked to join a band, and when his band plays at the Autumn Whirl dance, his preternatural shrieking music sends everyone into a literal frenzy. No one can remember what happened the next day, but Shiels learns that she danced far too long with Pyke, her nose has turned purple, and she may have done something with her boyfriend that she shouldn’t have. Who’s in control now?

Hilarious and relatable (despite the dinosaur), Hot Pterodactyl Boyfriend is about a teen who must come to terms with not being in control of all things at all times, break free of her mundane life, discover who her true self is, and, oh, finding out that going primal isn’t always a bad thing.

Shiels, student body chair at Vista View High School, is always in control. When Pyke, the first pterodactyl-human hybrid transfer student, shows up at her school, Shiels desperately wants everyone to accept him and is ready to spin any of his dangerous actions in a positive light. Her worries begin to fade as the students not only accept him but are mysteriously drawn to him. Pyke’s presence starts to awaken primal instincts among the students, and those he intimately connects with, including Shiels and her classmate Jocelyne, are marked with purple noses. The more Pyke influences Shiels’s environment, the more she loses control, letting her other priorities—school, applying for college, her boyfriend—slip away. Shiels must decide how much of herself she is willing to sacrifice in order to be with Pyke. The title of this novel will be a big draw, but readers looking for a steamy romance may be disappointed. This novel is more of a cautionary tale about falling for the wrong boy. Shiels is not a sympathetic character, but as with many tragedies, teens will continue reading to see what she does next. While Pyke’s presence is a driving force of the book, he does not do or say all that much; little is known about his background other than that he has great chest muscles, is part dinosaur, has an accent,and is able to partially and fully change human girls into pterodactyls. VERDICT-A quirky additional purchase.–Marissa­Lieberman, East Orange Public Library, NJ
— School Library Journal

Inthis absurdist take on high school archetypes, student body chair Shiels Kranemeets the ultimate outsider, Pyke, a strangely alluring humanoid pterodactylwho flies into school unannounced and disrupts her meticulously controlledlife. Amid concerns that Pyke will be ostracized, he instead becomes half ofthe school’s newest power couple and the front man for a band with a raw animalmagnetism that beguiles the entire school. Through this bizarre filter, Cumyn(Tilt) simultaneously pokes fun at over-the-top genre trends and engages withan array of pertinent topics—slut-shaming and ruined reputations, awkward sex,fears of the other—without becoming preachy. Cumyn pulls no punches whethercommenting on the idol worship of high school football players (Pyke’sball-catching prowess quells an angry parental mob but ultimately leads todisaster) or following Shiels’s unimpeded exploration of her sexuality and desires.At heart, this is a deliciously weird and original contemplation of personalmetamorphosis, the intoxicating effects of lust, and the clarity that comeswith experience. Ages 14–up.
— Publishers Weekly *STARRED REVIEW*

“Eighteen? He didn’t look a day less than sixty-five million.” A pterodactyl crash-landing on the track outside Valley View High marks the beginning of a turbulent and charged senior year for the student body chair, Sheils. Prior to Pyke’s arrival as the school’s newest and, OK, oddest transfer student, Sheils is happily dating Sheldon, an academically inclined equal, and ready to apply to college, bound to follow in the footsteps of her physician parents. But Pyke awakens something in her, both physiologically and philosophically, and forces her to question the construct of her life. In spite of its out-there premise—ahem, dino romance—Cumyn’s tale rests rather firmly in the familiar coming-of-age territory with the questions it raises. Part romance, part paranormal romp, part classic contemporary, this hybrid novel’s strengths lie in its strong relatable characters and unique concept. Already an author with a wide range—from middle grade to YA to literary adult fare—Cumyn shows off his wingspan with this engaging, offbeat novel. — Jennifer Barnes
— Booklist

Never say never. He's hot. He'sin a band. Every girl wants him. He has claws, wings, and a beak. He can alsofly. When Pyke, the school's first interspecies transfer student, walks throughthe doors of Vista View High, student-body chair Shiels, who normally has itall together, goes bonkers (a mild understatement). Pyke's appearanceinvigorates everyone. He can catch a spiraling football pass like no one else.He can turn a school dance party into a whirling, orgiastic riot. He can turnShiels' nose the same tone of purple as his skin with some bump-and-grind dancemoves. He can also make her question everything she has ever stood for. Cumyn'slatest (Tilt, 2011, etc.) is certainly good fun, full of fresh new devices (tosay the least). However, not only is it hard to swallow, it's also long-winded.Clocking in at over 400 pages, the plot twists and turns and expands over andover until it completely tries the most patient readers, whose willingness tosuspend their disbelief for a story this ridiculous might lapse after the first250 or so pages. That said, the book is full of hilarious one-liners,straight-on characterizations, some hot sexual tension, and a doofus,headstrong heroine who is all a-flutter and dead set on protecting herprehistoric honey. That makes up for a lot. A first in interspecies lovestories? (Romance. 14-18)
— Kirkus Reviews

Thisstrange, unique novel (with an awesome title) is essentially an extended riffon the fantastic notion of a pterodactyl boyfriend. Pyke, an interspeciestransfer student with humanlike legs and torso but with wings and a predatorybeak is literally dropped into a typical suburban high school, where he causesgeneral pandemonium and hysteria. The ensuing chaos is described from the pointof view of Shiels, a highly controlled senior who had been preoccupied withrunning student council, bossing her compliant boyfriend, and preparingapplications to exclusive colleges. Pyke thoroughly upends Shiels’s carefully managedlife simply by being himself. The pterodactyl boy barely speaks, but his exoticcharisma and animal sex appeal give him a bad-boy, rock-star image throughoutthe local high school and town. The boys want to be like him, the girls want tocuddle him, and their parents are aghast. Like Edward Scissorhands, Pykepossesses a dangerous combination of naïveté about human social conventions anda sharp weapon—in Pyke’s case, his beak. Inevitably, someone gets hurt, Pykebecomes a wanted criminal, and some of his smitten admirers, including bothShiels and her mother, break a lot of rules trying to save him.

Shielsis not a particularly likeable young woman in the early going, and readers wholike to identify with a positive main character may struggle to bear with herself-absorption. However, the book’s outrageous premise and mordant black humorkeep the action entertaining until Shiels finally learns some hard lessons.—WalterHogan.
— VOYA

Alan Cumyn is the author of several wide-ranging and often wildly different novels. A two-time winner of the Ottawa Book Award, he has also had work shortlisted for the Governor General’s Award, the Giller Prize, and the Trillium Award. He teaches through the Vermont College of Fine Arts and is a past Chair of The Writers’ Union of Canada. He lives in Ontario, Canada.
or
Not Currently Available for Direct Purchase