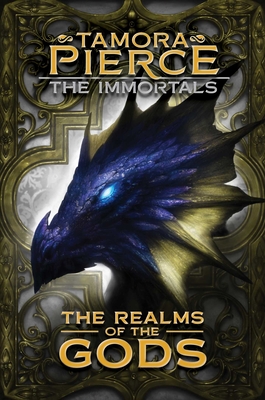 The Realms of the Gods (The Immortals #4)

Daine controls the fate of Tortall in this thrilling conclusion to the Immortals series, featuring an updated cover for longtime fans and fresh converts alike, and including an all-new afterword from Tamora Pierce.

During a dire battle against the fearsome Skinners, Daine and her mage teacher, Numair, are swept into the Divine Realms. Although they are happy to be alive, they are not where they want to be. They are desperately needed back home where their old enemy, Ozorne, and his army of strange creatures are waging war against Tortall.

While trapped in the perilous realms of the gods, Daine discovers her mysterious parentage. But as the secrets of her past are revealed, so is the treacherous way back to Tortall. And so Daine and Numair embark on an extraordinary journey home, where the fate of all Tortall rests with Daine and her wild magic.

Beloved author Tamora Pierce has written a great number of books, including the Song of the Lioness quartet, The Immortals quartet, the Circle of Magic quartet, the Protector of the Small quartet, The Circle Opens quartet, the Trickster series, The Will of the Empress, Melting Stones, the Beka Cooper series, and The Numair Chronicles. She lives in upstate New York with various cats, other four-legged animals, and birds who feed in her yard, and can be e-visited at Tamora-Pierce.net.
Loading...
or
Not Currently Available for Direct Purchase