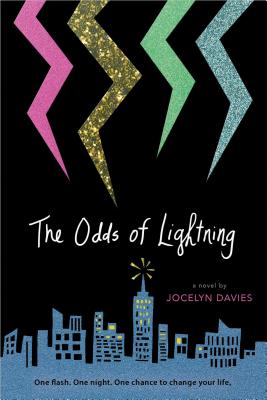 The Odds of Lightning (Hardcover)

A bolt of lightning inspires an incredible journey in this charming, magical realism adventure that takes four teens on an all-night journey through the streets of New York City.

Extraordinary things happen when we least expect them.

Tiny, Lu, Will and Nathaniel used to be best friends. Then life-defining events the summer before high school tore them apart. Now, three years later, they hardly talk anymore. Nathaniel has become obsessed with winning the prestigious science scholarship that his genius older brother once won. Will has risen from anonymity to popular soccer star. Lu grew into a brash, impetuous actress. And shy, poetic Tiny has slowly been fading away.

But fate weaves their lives together again the night before the SATs, during a wild thunderstorm that threatens to shut down New York City. And lightning strikes.

Before they know what's hit them, the four teens embark on an epic all-night adventure to follow their dreams, fall in and out of love, reconcile the past, and overcome the fears that have been driving them since that one lost summer. And by the time the sun rises, odds are they’ll discover that there’s a fine line between science and magic, and that the mysteries of love and friendship can’t be explained.

Jocelyn Davies is a children’s book editor in New York City, where she was born and raised. She studied English and theater at Bates College in Maine. A New Yorker at heart, she currently lives in Brooklyn. She is also the author of the A Beautiful Dark series, and has never been struck by lightning—at least not literally. Visit Jocelyn online at JocelynDavies.com and follow her on Twitter @JocelynDavies.

Praise For The Odds of Lightning…

“The third-person narration interleaves "now" with "then" sections, shifting focus to alternate among all four protagonists. The voices are well-drawn . . . Davies captures a realness to these . . .teens' interactions and history. Both "then" and "now" plots combine to make an engaging work.”
— Kirkus

"In third-person chapters that flip between her characters’ past and present, Davies acutely expresses their innermost feelings, hopes, and vulnerabilities. As these four teens crisscross the city, contemplating who they really are and what makes them worthy of friendship and love, readers will be hard-pressed not to reflect on similar questions themselves."
— Publishers Weekly, Starred Review

Fans of David Levithan will appreciate the real-life struggles balanced with quirky elements. For those who enjoy a touch of magic with their romance.
— School Library Journal

The universal theme of this fantasy tinged coming of-age tale is conveyed through third-person chapters that alternate focus among the characters, flashbacks that unravel the event that tore them apart, and a touch of mystery and magic. Most readers will choose to believe in the unbelievable.
— Booklist
or support indie stores by buying on
Copyright © 2020 American Booksellers Association