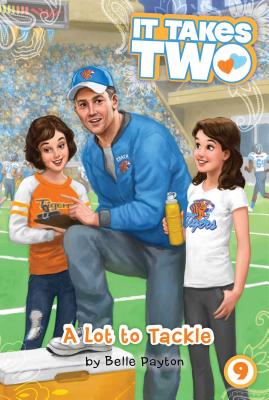 The Tigers have made it to the state championship in the ninth book of the It Takes Two series!

Alex has just gotten the worst grade of her life in French, one of her best subjects! As she studies like crazy to make up for the terrible grade, she ends up missing an important student council meeting, leaving her more frustrated than ever. Alex begins to wonder why she should even care about her grades and extra curricular activities if she isn’t doing well…

Meanwhile, Ava’s football team lost their last playoff game, leaving them out of the finals. Even though she didn’t play particularly well, Ava knows she wasn’t the only one, so she doesn’t understand why some of the boys on the team are blaming her. Her teammates are also saying that if the Tigers don’t win the state championship, her father will be out of a job…and he isn’t denying it! Ava is horrified by the idea of leaving Ashland behind for good, but Alex doesn’t seem to care. With so much going on at once, can Ava get her twin to snap out of it so they can rally around their family and cheer the Tigers on to victory?

For A Whole New Ball Game:
"The twin device is effectively deployed as each girl seeks to understand herself independently, in relation to her twin, and in the context of her new town; there's also appeal in the plot's sitcom elements of overheard conversations, secret observations, and all the uncertainty that comes with being a new place."