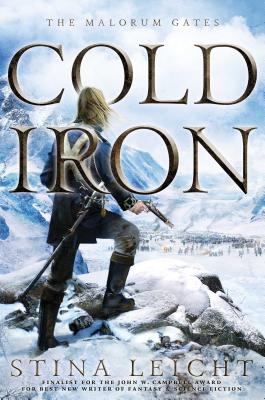 Fraternal twins Nels and Suvi move beyond their royal heritage and into military and magical dominion in this flintlock epic fantasy debut from a two-time Campbell Award finalist.

Prince Nels is the scholarly runt of the ancient Kainen royal family of Eledore, disregarded as flawed by the king and many others. Only Suvi, his fraternal twin sister, supports him. When Nels is ambushed by an Acrasian scouting party, he does the forbidden for a member of the ruling family: He picks up a fallen sword and defends himself.

Disowned and dismissed to the military, Nels establishes himself as a leader as Eledore begins to shatter under the attack of the Acrasians, who the Kainen had previously dismissed as barbarians. But Nels knows differently, and with the aid of Suvi, who has allied with pirates, he mounts a military offensive with sword, canon, and what little magic is left in the world.

“This is a thoroughly enjoyable book, with solid, believable characters, absorbing action, and sprawling scope. It's what I think of as '90s Epic Fantasy (mostly because of how many books like this I was devouring at the time) — fantasy that's figuring out its relationship to its own history and lineage in order to unabashedly revel in it. It reminded me, pleasurably, of Robin Hobb's Assassin's Apprentice series.”
— , NPR Books

“There are quite a few underrated authors out there. These are authors with a disgusting amount of talent, but not nearly the attention for said talent that they deserve. Stina Leicht, in my humble opinion, is at the top of that list. I truly loved this book."
— , Bookworm Blues

“In many ways, the world-building is fascinating. Its protagonists have complex motivations, failings and insecurities. It’s a book with big ideas and an epic storyline.”
— , Fantasy-Faction

“Leicht loads up on all the thrills we love in the genre (Huge battles! Countries in peril! Heroes facing impossible odds! Coming-of-age stories! Banter! So much banter!), she also plays with the formula, twisting expected tropes in unusual ways. I don’t think I have ever come across a fantasy novel that used the advantages of being, you know, fantasy to think around giving martial power an honored, or at least feared, place at the table of power.”
— , B&N Sci-Fi & Fantasy Blog

“[Cold Iron] offers a full-scale flintlock fantasy world in which a pair of young scions stretches beyond their royal heritage and into realms both military and magical. Stina Leicht, whose previous books were historical/urban fantasy, makes a promising turn to epic fantasy [with] an excellent trio of central characters.”
— , SF Signal

“The allure of fascinating world building permeates Cold Iron from its foundation. There are distinct races and cultures, a magical system with spirituality and ritual within it, ‘flintlock’ technology, and rumors of mythical ‘Old Ones’ soon to return. But rather than being plot driven as epic series often are, Cold Iron gets its page length from firmly character driven exploration.”
— , The Skiffy & Fanty Show

Stina Leicht is a science fiction and fantasy writer living in central Texas. Her second novel, And Blue Skies From Pain, was on the Locus Recommended Reading list for 2012. She was an Astounding Award for Best New Writer finalist in 2011 and in 2012. In 2011 she was also shortlisted for the Crawford Award.
Loading...
or
Not Currently Available for Direct Purchase