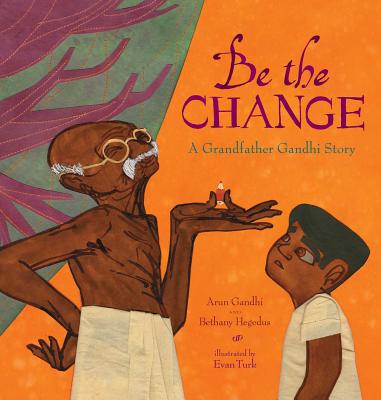 In this breathtaking companion to the award-winning Grandfather Gandhi, Arun Gandhi, with Bethany Hegedus, tells a poignant, personal story of the damage of wastefulness, gorgeuously illustrated by Evan Turk.

At Grandfather Gandhi’s service village, each day is filled, from sunrise to sunset, with work that is done for the good of all. The villagers vow to live simply and non-violently. Arun Gandhi tries very hard to follow these vows, but he struggles with one of the most important rules: not to waste.

How can throwing away a worn-down pencil hurt anyone? How can wastefulness lead to violence? With the help of his grandfather, Arun learns how every wasteful act, no matter how small, affects others. And in time he comes to understand the truth of his grandfather’s words: “Be the change you wish to see in the world.”

Praise For Be the Change: A Grandfather Gandhi Story…

“Gandhi and Hegedus’ relatively lengthy text is alternately direct and lyrical. . . . Turk’s striking mixed-media illustrations . . . complement the complexity of the ideas being explored and illuminate the subdued action of the text.”
— Kirkus Reviews

“Turk’s artwork is stunning in composition and color throughout…As a vehicle for showing the human side of the seminal figure that is Gandhi, this is a valuable title for young readers.”
— Horn Book

* “The full-bleed spreads immerse readers and take them on the journey. . . . This handsome book asks a lot of young readers but carries important messages delivered in a personal and relatable manner.”
— School Library Journal, starred review

“An in-depth exploration of the connections between waste and violence. . . . As in the previous book, Turk’s mixed-media images create a vibrant, dazzlingly imagined backdrop for the weighty philosophical discussions at play.”
— Publishers Weekly

Arun Gandhi, born in 1934, is the fifth grandson of Mohandas K. Gandhi, also known as Mahatma Gandhi. He was a journalist for more than thirty years for the Times of India and has written for The Washington Post. His first of two books for children was Grandfather Gandhi. Currently, Arun serves as president of the Gandhi Worldwide Education Institute and travels the world speaking to governmental leaders, as well as to university and high school students about the practices of peace and nonviolence. He lives in Rochester, New York. Visit him at ArunGandhi.org.

Bethany Hegedus is the author of Between Us Baxters and Truth with a Capital T, as well as the coauthor of Grandfather Gandhi. She owns The Writing Barn, a writing workshop and retreat center in Austin, Texas. She teaches widely and speaks across the country. Visit her online at BethanyHegedus.com.

Evan Turk is an Ezra Jack Keats Award–winning illustrator, author, and animator. He is the author-illustrator of The Storyteller, Heartbeat, You Are Home: An Ode to the National Parks, A Thousand Glass Flowers, and Hello, Moon and the illustrator of Muddy: The Story of Blues Legend Muddy Waters, which was a New York Times Best Illustrated Children’s Book; The People’s Painter; Grandfather Gandhi; and its companion Be the Change. Originally from Colorado, Evan now lives in southern California with his husband and two cats. He is a graduate of Parsons School of Design. Visit him at EvanTurk.com.
Loading...
or support indie stores by buying on
(This book is on backorder)