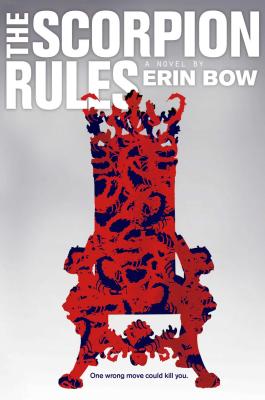 “Bow's amoral artificial intelligence overlordis one of my favorite characters in a while.”
— Maggie Stiefvater, author of The Raven Boys

“In Fairy Tales, princesses are always worried about who they are going to marry. Greta is more concerned with her responsibilities as a future head of state. Erin Bow’s Greta is my kind of Princess.”
— Megan Whalen Turner, author of The Thief

"Bow's vision ofour apocalypse is stark, beautiful and terrifying. This is my favouritebook."
— EK Johnston, author of The Story of Owen

“THE SCORPION RULESis a bloody, breath-taking, beautiful book… As a fellow craftsperson I'm leftin awe, and as a reader I'm left feeling transformed.”
— Zoe Marriott, author of The Name of the Blade series

What genre would you consider The Scorpion Rules to be?

The Children of Peace have been trained to behave in a

dignified manner, even when they are facing death. Do

you think this training is cruel?

water. Discuss whether this seems plausible.

Is Talis a multidimensional character? How does the author present

him as male even though he inhabits a female body?

Elián. Do you think it’s natural that she could care for both of them?

Does it seem to matter in their society?

Discuss the following quote from Chapter 11: “You cannot control a

man if you take everything from him. You must leave him something to

lose.” Is there a certain freedom that comes from being unencumbered?

personhood. How does the Abbot demonstrate human qualities?

In Chapter 8, shortly after Elián’s arrival, Greta says, “I had changed.”

character? How has knowing Elián helped cause these changes?

Xie and Elián tell Greta that they think about escaping all the time, but

Greta has never thought about it. Is it because she thinks being a Child

of Peace is her destiny, or is she just resigned to her fate?

As the story progresses, Greta begins to discover and claim her power. Are

you worried that once she has joined Talis she will misuse her authority?

Almost as soon as Cumberlanders invade the Precepture, Tolliver Burr

begins planning Greta’s torture with the apple press. Why is torture

one of the rituals of war? Do you think torture always gets “results”?

status quo, or is he being heroic, like Spartacus?

In Chapter 20, after the Abbot tells Greta there might be an alternative

to dying, she thinks: “Stirring inside me was the kind of fear that

comes with hope.” What does Greta mean? Do you think that hope