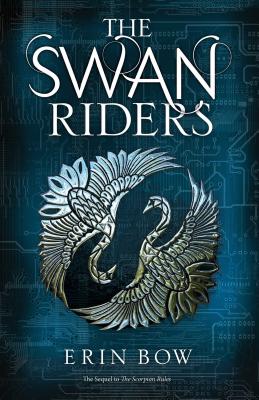 The Swan Riders (Prisoners of Peace)

Greta is only sixteen years old, but her new enhancements are burning through her mortal body at an alarming rate. Of course the leader of the AIs, an ancient and compelling artificial intelligence named Talis, has a plan. Greta can simply do what he’s done when the time comes, and take over the body of one of the Swan Riders, the utterly loyal humans who serve the AIs as part army, part cult.

First though, Greta will have to find a way to stay sane inside her new self. Talis’s plan for that involves a road trip. Escorted by Swan Riders, Greta and Talis set out on a horseback journey across the strange and not-quite-deserted landscape of Saskatchewan. But there are other people interested in Greta, people who want to change the world…and the Swan Riders might not be as loyal as they appear…

*"Slyly humorous, starkly thought-provoking, passionate, and compassionate—and impeccably written to boot: not to be missed."
— Kirkus Reviews, Starred Review, on The Scorpion Rules

*"Bow continually yanks the rug out from under readers, defying expectations as she crafts a masterly story with a diverse cast, shocking twists, and gut-punching emotional moments."
— Publishers Weekly, starred review, on The Scorpion Rules

*"Masterful, electric prose... Bow delivers a knockout dystopian novel that readers will devour with their hearts in their mouths."
— School Library Journal, Starred Review, on The Scorpion Rules

"Bow has crafted a true sci-fi narrative around the AI premise, utilizing an imaginative world and well-developed characters. Through Greta’s conflicts, the author explores what it means to be human."
— Booklist, on The Scorpion Rules

" This is a smart, compelling read that explores the complicated nature of love, family, peace, war, and technology; fans of Johnson’s Summer Prince and Collins’s Hunger Games who are searching for an empowering and intelligent read-alike need look no further."
— The Horn Book Magazine, on The Scorpion Rules

“Bow's amoral artificial intelligence overlord is one of my favorite characters in a while.”
— Maggie Stiefvater, author of The Raven Boys, on The Scorpion Rules

“Clever and unexpected, THE SCORPION RULES is a game-changing novel about the consequence of war and the brutality of peace. Unforgettable!”
— Suzanne Young, New York Times bestselling author of The Program series, on The Scorpion Rules

"Elegant world-building, white-knuckle plot, and wonderful characters make The Scorpion Rules an extraordinary tale. I couldn't put it down."
— V.E. Schwab, author of A Darker Shade of Magic, on The Scorpion Rules

"Bow's vision of our apocalypse is stark, beautiful and terrifying. This is my favourite book."
— EK Johnston, author of The Story of Owen, on The Scorpion Rules

"I don't know which is more delicious, the storytelling or the villain."
— Tone Almhjell, author of The Twistrose Key, on The Scorpion Rules

“THE SCORPION RULES is a bloody, breath-taking, beautiful book… As a fellow craftsperson I'm leftin awe, and as a reader I'm left feeling transformed.”
— Zoe Marriott, author of The Name of the Blade series, on The Scorpion Rules