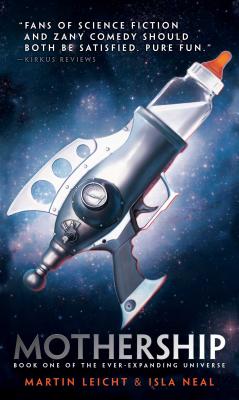 Pregnancy is never easy—especially not when extraterrestrials are involved. Equal parts Juno and Aliens this first novel in the Ever-Expanding Universe trilogy is a hilarious, science-fiction romp that Kirkus Reviews calls “pure fun.”

Elvie Nara was doing just fine in the year 2074. She had a great best friend, a dad she adored, and a bright future working on the Ares Project on Mars. But then she had to get involved with sweet, gorgeous, dumb-as-a-brick Cole—and now she’s pregnant.

“Fans of science fiction and zany comedy should both be satisfied. Pure fun.”
— Kirkus Reviews

“Juno meets Aliens, sort of, in this wacky debut novel. An extremely clever premise that is skillfully carried off by the authors.”
— VOYA

“The fast-paced action, laugh-out-loud moments, and memorable characters [are a] a whole lot of fun.”
— Publishers Weekly

Isla Neal grew up in a small mountain town in Southern California and earned her MFA in Creative Writing for Children and Teens at the New School in in New York City, where she currently lives and works. Isla Neal and Martin Leicht are the authors of The Ever Expanding Universe trilogy, which includes Mothership, A Stranger Thing, and The World Forgot.
or
Not Currently Available for Direct Purchase