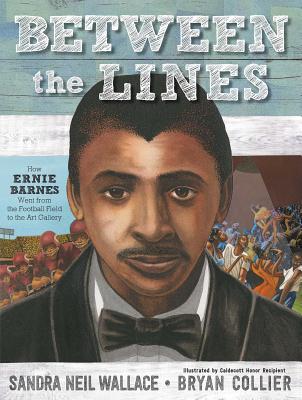 Discover the remarkable true story of NFL star Ernie Barnes—a boy who followed his dreams and became one of the most influential artists of his generation—with this beautiful and fascinating nonfiction picture book illustrated by four-time Caldecott Honor recipient Bryan Collier.

“An artist paints his own reality.” —Ernie Barnes

When Ernie Barnes was growing up in North Carolina in the 1940s, he loved to draw. Even when he played as a boy with his friends he drew with a stick in the mud. And he never left home without a sketchbook. He would draw families walking home from church, or the old man on the sofa. He drew what he saw.

But in the segregated south, Ernie didn’t know how to make a living as an artist. Ernie grew tall and athletic and became a football star. Soon enough the colleges came calling. Still, in his heart Ernie longed to paint. Would that day ever come?

Ernie Barnes was one of the most important artists of his time known for his style of elongation and movement. His work has influenced a generation of painters and illustrators and can be found in museums and collections, such as the African American Museum in Philadelphia and the California African American Museum.

Between the Lines is a story of inspiration, spirit, and of an American original who pursued his dream. This enchanting picture book includes pieces of artwork created by this little known artist who captured the truth and beauty of the world he saw around him.

Praise For Between the Lines: How Ernie Barnes Went from the Football Field to the Art Gallery…

"This rich portrait of an innovative and determined artist begins with Ernie Barnes as a child in the segregated South. Despite a desire to pursue art, football was Barnes’s ticket to college, where he visited museums for the first time and was dismayed to find no black artists represented....Collier’s multidimensional collages are a dynamic mix of gridiron action and quiet moments of Barnes with his brushes and canvases. It’s a well-sourced, stirringly told account of an artist drawing inspiration from and finding beauty in the immediate surroundings of his world." -- Publishers Weekly, starred review
— Publishers Weekly *STARRED REVIEW

"Not even the thrill of football could dissuade Ernie Barnes from pursuing his artistic dream.Born in 1938 in Durham, North Carolina, Ernie grew up a quiet kid in an African-American family with a mother who exposed her children to music and art despite the segregation of museums and performance halls. While his 6-foot-3-inch frame in high school prompted the football coach to recruit him, Ernie never felt as passionately about football as he did about art. He would sit on the bench and sketch the plays anytime he wasn't on the field, which his coaches did not always appreciate. When Ernie's successful professional football career slowed, he approached the American Football League (which merged with the National Football League in 1970) to become their official artist. While this is not an own-voices story for Wallace, both her extensive research and her prior career as an ESPN reporter make her well-qualified to tell this story. African-American artist Collier captures Barnes' life as only another dedicated artist could: with skill, a strong sense of place, and hints throughout of Barnes' artistic style. Collier's cover image encapsulates so much of Barnes' fascinating story that, after reading the book, children can revisit the cover to discover its clues. A biography with appeal for sports fans and budding artists alike, it will also beckon to any reader who appreciates a well-told, artfully illustrated story." -- Kirkus, starred review
— Kirkus STARRED REVIEW

Growing up in North Carolina during the 1940s and ’50s, Ernie Barnes was a quiet black kid who loved to draw and paint. Though he had little interest in sports, he excelled at high school football and earned a scholarship to college, where an art teacher inspired him to paint what he saw around him. He played in the NFL for five years before retiring to devote himself to art. Barnes painted what he knew, from neighborhood memories to football players in action. As a college student, he once asked to see paintings by African American artists at the local art museum and was told, “Your people don’t express themselves in that way.” He knew otherwise. Years later, the same museum exhibited his paintings. The book’s lengthy, helpful back matter includes several of Barnes' paintings as well as notes by the author and illustrator. Co-author of Blood Brother (2016) and Bound by Ice (2017), Wallace tells the story using specific details that bring it to life and broad perspective that heighten its meaning. Collier’s expressive, unconventional illustrations, created with watercolors and collage, use rich colors and overlapping images to portray Barnes growing from a shy child to a self-assured artist. A visually striking, enlightening picture-book biography. — Booklist, starred review
— Booklist *STARRED REVIEW*

The pursuit of dreams and the resilience of the human spirit shine in this illustrated biography of one of the world’s greatest sports artists. Growing up in the segregated south, Ernie Barnes loved to draw and rarely left home without his sketchbook. Shy, quiet, and often picked on, Barnes found his voice by painting what he observed in his surroundings: families walking, an old man snoring, the junk man peddling. When he grew to be six foot three, he was recruited for the high school football team and eventually earned a sports scholarship to an all-black university. Still, Barnes was discouraged: he wanted to be an artist instead of an athlete. His art teacher inspired him to paint what he saw, and suddenly his calling was realized: he will paint football, seeing the beauty in what before was ordinary. Barnes would go on to make the NFL, play for the Colts, and paint his first football painting, The Bench, a work that would define his career for years to come. After leaving football for good, his professional dream was fully realized when he was invited to become the official artist for the American Football League: “When I became an athlete, I didn’t stop being an artist.” Collier’s illustrations are storytellers on their own, blending emulations of Barnes’s work with dynamic, mixed-media imagery that enhances the book’s historical relevance. VERDICT An absolutely indispensable illustrated biography that will remind readers of all ages that it’s never too late to pursue their dreams. -- School LIbrary Journal, starred review
— School Library Journal *STARRED*