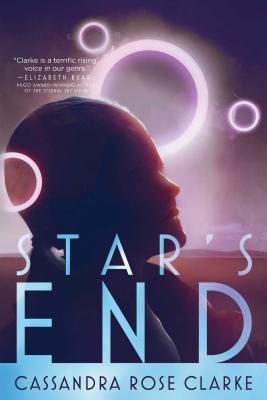 Esme Coromina has always known that one day she would run the Four Sisters, the small planet system that her father grew into a corporate empire. Raised as the pampered heir to the company, Esme lived the best years of her life at Star’s End, the estate her father built on the terraformed moon where he began his empire. In the tropical sunlight and lush gardens, Esme helped raise her three motherless half-sisters. But as Esme is groomed to take over the family business of manufacturing weapons for the mercenary groups spread across the galaxy, she slowly uncovers the sinister truth at the heart of her father’s company. And when those secrets are finally revealed, Esme is sure that she’s lost her sisters—and part of her soul—for good.

Now, after a lifetime of following her father’s orders, Esme has a second chance. For the first time, Esme is making her own decisions, and the impact of her decisions will reverberate throughout the Four Sisters. As Esme struggles to assemble her estranged sisters for one last goodbye with their dying father, she has to choose whether she wants to follow in her father’s footsteps—or blaze a daring new path.

Cassandra Rose Clarke proves once again why she is one of science fiction’s most ambitious writers with a gripping family saga that spans years and planets.

* “[A] novel of grand ideas, bringing relatable human motives and vulnerabilities to a world in which industry, government, warfare, and space travel are inextricably intertwined.”
— Publishers Weekly, STARRED REVIEW

Cassandra Rose Clarke is the author of Our Lady of the Ice. She grew up in south Texas and currently lives in a suburb of Houston, where she writes and teaches composition at a local college. Cassandra’s first adult novel, The Mad Scientist’s Daughter, was a finalist for the 2013 Philip K. Dick Award, and her YA novel, The Assassin’s Curse, was nominated for YALSA’s 2014 Best Fiction for Young Adults. Her short fiction has appeared in Strange Horizons and Daily Science Fiction. Visit her at CassandraRoseClarke.com.
Loading...
or support indie stores by buying on