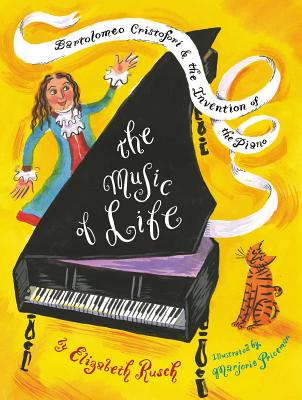 The Music of Life

Bartolomeo Cristofori & the Invention of the Piano

Award-winning biographer Elizabeth Rusch and two-time Caldecott Honor–recipient Marjorie Priceman team up to tell the inspiring story of the invention of the world’s most popular instrument: the piano.

Bartolomeo Cristofori coaxes just the right sounds from the musical instruments he makes. Some of his keyboards can play piano, light and soft; others make forte notes ring out, strong and loud, but Cristofori longs to create an instrument that can be played both soft and loud.

His talent has caught the attention of Prince Ferdinando de Medici, who wants his court to become the musical center of Italy. The prince brings Cristofori to the noisy city of Florence, where the goldsmiths’ tiny hammers whisper tink, tink and the blacksmiths’ big sledgehammers shout BANG, BANG! Could hammers be the key to the new instrument?

At last Cristofori gets his creation just right. It is called the pianoforte, for what it can do. All around the world, people young and old can play the most intricate music of their lives, thanks to Bartolomeo Cristofori’s marvelous creation: the piano.

Praise For The Music of Life: Bartolomeo Cristofori & the Invention of the Piano…

* “Rusch playfully weaves aural imagery throughout this engaging story of how Bartolomeo Cristofori came to invent the piano . . . It’s a spirited, informative tale that will resonate with music aficionados young and old.”
— Publishers Weekly, Starred Review

* “A bright, colorful introduction to a beloved instrument . . . Priceman's signature artwork is a perfect match for the words . . . Delightfully energetic, this will inspire young pianists.”
— Kirkus Reviews, Starred Review

* “Priceman’s watercolors are zesty evocations of sound unleashed . . . Rusch supplies an amazing treasure trove of back matter that extends the title’s interest beyond an expected picture-book audience . . . Kids taking music lessons or preparing for a school invention fair, teachers looking for high quality STEAM materials, and anyone with earbuds dangling from her/his head need to listen to the Cristofori story.”
— BCCB, Starred Review

“Priceman’s gouache-and-ink illustrations exuberantly fill all available page space . . . Fast-paced, lively, and informative, this book will appeal to music lovers as well as a wider audience, who may be creatively inspired by these passionate musicians and their instruments.”
— Booklist

“Rusch’s evocative text is underscored by Priceman’s breezy but detailed gouache-and-ink illustrations and the book’s dynamic design . . . which add a near soundtrack to the words. . . Bravo!”
— The Horn Book

Elizabeth Rusch is an award-winning children’s book author and magazine writer. Her books include The Mighty Mars Rovers, For the Love of Music: The Remarkable Story of Maria Anna Mozart, and Electrical Wizard: How Nikola Tesla Lit Up the World. She teaches nonfiction and children’s literature at the Attic Institute in Portland, Oregon. Visit her online at ElizabethRusch.com.

Marjorie Priceman, illustrator of many acclaimed picture books, has won Caldecott Honors for her illustrations in Zin! Zin! Zin! A Violin! by Lloyd Moss and Hot Air: The (Mostly) True Story of the Frist Hot-Air Balloon Ride, which she also wrote. She lives in Lewisburg, Pennsylvania.
Loading...
or support indie stores by buying on