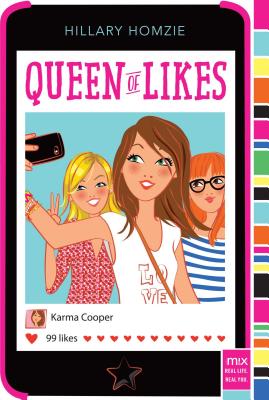 A tween social media queen is forced to give up her phone and learn that there’s more to life than likes in this M!X novel from the author of The Hot List.

Karma Cooper is a seventh grader with thousands of followers on SnappyPic. Before Karma became a social media celebrity, she wasn’t part of the in-crowd at Merton Middle School. But thanks to one serendipitous photo, Karma has become a very popular poster on SnappyPic. Besides keeping up with all of her followers, like most kids at MMS, her smartphone—a bejeweled pink number Karma nicknamed Floyd—is like a body part she could never live without.

But after breaking some basic phone rules, Karma’s cruel, cruel parents take Floyd away, and for Karma, her world comes to a screeching halt. Can Karma—who can text, post photos, play soccer, and chew gum all at the same time—learn to go cold turkey and live her life fully unplugged?

Hillary Homzie is the author of the tween novels Queen of Likes, The Hot List, and Things Are Gonna Get Ugly, as well as the comedic chapter book series Alien Clones from Outer Space and picture book If You Were a Princess. During the summers, Hillary teaches in the graduate program in children’s writing at Hollins University. A former sketch comedy performer in New York City, Hillary currently lives with her family in Northern California.
Loading...
or support indie stores by buying on