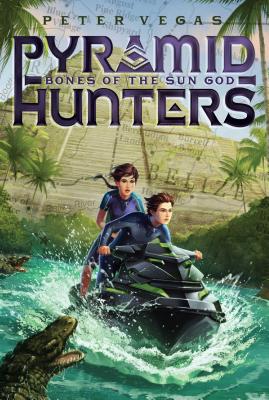 Sam Force travels to Belize to investigate an ancient and evil secret society in this second novel of the Pyramid Hunters series, which School Library Journal called a mix of “Indiana Jones, National Treasure, and The Da Vinci Code.”

After his adventures in Egypt, Sam Force is finding it nearly impossible to return to everyday life at boarding school—especially now that he knows his parents are still alive. However, his Uncle Jasper has banned him from setting off in search of them until he can go with Sam, but Sam’s not sure he can wait that long. When a man turns up at his school—a man he last saw in the Egyptian desert—he knows he can’t.

Sam needs to continue the hunt for his parents. Luckily, his friend Mary Verulam has a plan, and before he knows it he’s on his way to Belize.

However, from the moment he lands, Sam finds himself being followed and threatened. When his research leads him to a local crocodile park and an encounter with the leader of a mysterious crocodile cult, things become really dangerous.

Sam is left to wonder if he’ll ever be able to locate his parents—and if there is anyone he can trust.

Peter Vegas lives in Auckland, New Zealand, with his wife, daughter, two dogs, and a motorbike. He draws and writes at night and practices the dark arts of advertising during the day. His little corner of the Internet is PeterVegas.com. Peter Vegas is the author of the Pyramid Hunters series.
Loading...
or
Not Currently Available for Direct Purchase