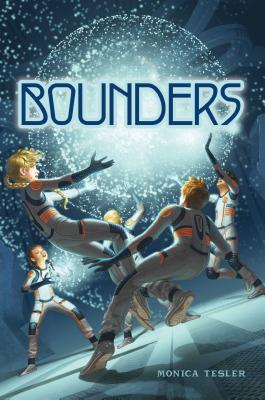 "Bounders is a joyful space adventure full of humor, friendships and action. This is a great sci-fi adventure for boys and girls alike. I had so much fun reading it!"
— S.J. Kincaid, author of the INSIGNIA series

"A richly detailed, highly imaginative world and a cast of clever, creative kids.Readers will be eager to bound into the next book."
— Shannon Messenger, author of the Keeper of the Lost Cities series

“Fans of Ender’s Game will feel right at home in this fast-paced debut…I read it in a day, unable to put it down, and look forward to more from this promising new author!”
— Wesley King, author of The Incredible Space Raiders from Space! and OCDaniel

"A sci-fi space adventure sure to please middle-graders looking to get hooked on a new series."
— Booklist

"While the story raises its share of ethical questions, it shines in its depiction of neurodiverse characters, especially Cole and Mira, as Tesler uses familiar SF conventions to show that kids with ADD, autism, or other conditions can be as heroic as anyone else."
— Publishers Weekly

Monica Tesler lives south of Boston with her husband and two boys. She earned her undergraduate and law degrees from the University of Michigan. She writes on the commuter boat, in coffee shops, and at her kitchen table. She tries to meditate every day but often ends up fantasizing about space, time travel, or strange lands, both real and imagined.
Loading...
or support indie stores by buying on