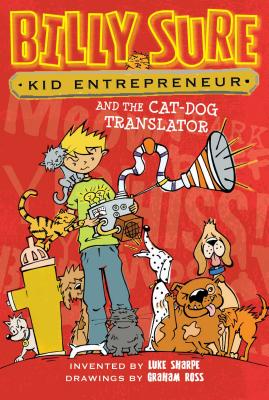 Billy Sure Kid Entrepreneur and the Cat-Dog Translator

Billy Sure, twelve-year-old inventor and CEO of Sure Things, Inc., invents a device that lets everyone in on what their pets are trying to say in the third book of a hilarious middle grade series!

Everyone is talking about Billy Sure, the twelve-year-old genius and millionaire inventor whose inventions have become instant hits. From the All Ball and the Sibling Silencer, to the Stink Spectacular and the Disappearing Reappearing Make-Up, Billy Sure can’t lose—and his latest invention, the Cat-Dog Translator, is sure to follow suit. After all, who hasn’t wondered what their cat’s meow or their dog’s bark meant? The Cat-Dog Translator is a device that will finally let pet owners in on what their pets are really trying to say.

But Billy quickly finds out, when pets start talking, there’s no telling what kinds of embarrassing secrets they could reveal! Is the world ready for Billy Sure to unleash his latest invention?

Graham Ross has grand plans for world domination through his illustrated inventions. Right now he’s having a “ball” hanging out with Billy Sure, the next sure thing! Graham lives in a little log home in the woods with his inventive family, just outside of Merrickville, Canada.
Loading...
or support indie stores by buying on