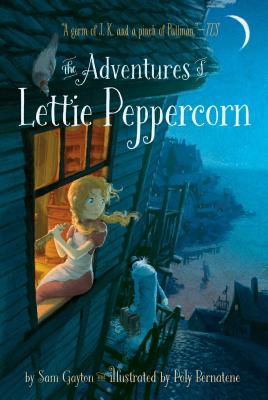 The Adventures of Lettie Peppercorn

An alchemist peddles a new magical invention—and the key that could unlock Lettie Peppercorn’s family secrets—in this quirky “tale of self-discovery, family, and friendship” (The Independent).

Lettie Peppercorn cannot go outside. Ma told her so right before Ma disappeared forever. So Lettie’s house is on stilts, and she is stuck with only the wind and a pigeon for a friend. Nothing exciting has ever happened to her—until the night a strange merchant appears.

He claims to be an alchemist—the greatest that ever lived—and he is here to sell Lettie his newest invention. It’s an invention that could change Lettie’s life—and the world forever. An invention called “snow.”

But snow is not the only secret he holds. The alchemist knows where Lettie’s Ma is. And Lettie will do anything to get Ma back—even if it means risking her own life.

Join the brilliant and resourceful Lettie Peppercorn as she sails across the world to reunite her family and discover the truth about herself.

Praise For The Adventures of Lettie Peppercorn…

This British import combines familiar fantasy elements and quirky details to create a tale filled with transformation and danger...Gayton uses fanciful language that adds to the fairy-tale feel while also painting fiercely frightening portraits of his various villains.
— Kirkus Reviews

Full of fairy-tale and fun, which should appeal to Lemony Snicket fans.
— The Daily Mail

"What ensues is a magical adventure over sea, into icebergs, and around a whaling ship, reminiscent of Roald Dahl and Lewis Carroll... This nonsensical and fantastical novel explores the ideas of family, sacrifice, and friendship, while celebrating the imagination."
— Booklist

Poly Bernatene was born in 1972 in Buenos Aires, Argentina, and has been drawing ever since. He graduated from Buenos Aires’s art school, where he developed a great interest in managing different techniques in his work, which has always been based on experimentation and diversity. Poly’s work is constantly changing and developing as he looked for new ways to tell stories. He has worked in advertisement, animation, and comics. During the last fifteen years, he established an exciting career as a professional illustrator, having published more than sixty children’s books in eleven countries.
Loading...
or support indie stores by buying on