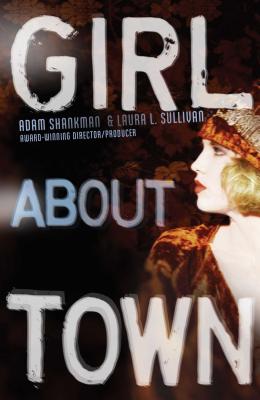 Not too long ago, Lucille O’Malley was living in a tenement in New York. Now she’s Lulu Kelly, Hollywood’s newest It Girl. She may be a star, but she worries that her past will catch up with her. Back in New York she witnessed a Mafia murder, and this glamorous new life in Tinseltown is payment for her silence.

Dashing Freddie van der Waals, the only son of a New York tycoon, was a playboy with the world at his feet. But when he discovered how his corrupt father really made the family fortune, Freddie abandoned his billions and became a vagabond. He travels the country in search of redemption and a new identity, but his father will stop at nothing to bring him home.

When fate brings Lulu and Freddie together, sparks fly—and gunshots follow. Suddenly Lulu finds herself framed for attempted murder. Together, she and Freddie set out to clear her name. But can they escape their pasts and finally find the Hollywood ending they long for?

Praise For Girl about Town: A Lulu Kelly Mystery…

“Girl About Town is a nonstop romp with all the magic of a classic Hollywood film. From charming romance to captivating mystery, every page sparkled with spirit and style. I never wanted it to end!”
— Jessica Alba

“Readers will love the crackling chemistry and delicious banter. The juicy mystery had me flying through the pages. And the romance is to die for!”
— Kresley Cole, bestselling author of The Arcana Chronicles

“Girl About Town will give you Gossip Girl feels with a hint of old school Nancy Drew that takes you on a dramatic roller coaster of fun and flash.”
— Anna Todd, bestselling author of the After series

“This lushly written mystery pulls back the curtain on Old Hollywood and exposes a vivid and thrilling world filled with hot heirs and gossip girls, romance, and murder. Pure fun!”
— Amy Talkington, writer/director

“Mystery, intrigue, and romance in an entertaining look at the price of success in Hollywood.”
— School Library Connection

“Cinematic pacing, a compelling whodunit, and the glitzy aura of golden age Hollywood combine in this star-studded novel. . . . The authors’ knack for snappy dialogue is just the tops.”
— Booklist

Laura L. Sullivan is a former newspaper editor, biologist, social worker, and deputy sheriff who writes because storytelling is the easiest way to do everything in the world. Her books include Love By the Morning Star, Delusion, and Ladies in Waiting. Laura lives on the Florida coast.
Loading...
or
Not Currently Available for Direct Purchase