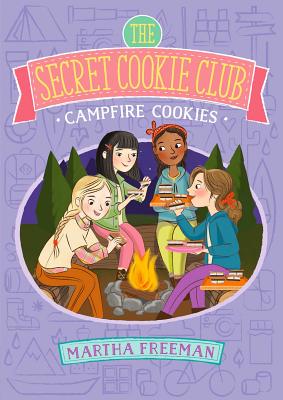 The girls from Flowerpot Cabin are back at camp in Martha Freeman’s second novel in the Secret Cookie Club series, which was called “a younger version of Ann Brashares’s The Sisterhood of the Traveling Pants” by School Library Journal.

The Secret Cookie Club members Grace, Emma, Olivia, and Lucy are excited to be back at Moonlight Ranch summer camp with their beloved counselor, Hannah. But when a mysterious letter arrives, Hannah is plunged into despair. Secret Cookie Club to the rescue!

After puzzling out the contents of the letter, they make a plan to fix Hannah’s life—a plan that requires a magic spell, a daring mission to the boys camp, and a big batch of campfire cookies. What could possibly go wrong? With a dash of romance, a pinch of mystery, and a heaping tablespoon of fun, this camp adventure is as satisfying as a warm chocolate chip cookie.

The four members of Flowerpot Cabin reunite for another summer of friendship, romance, mystery, and cookies (The Secret Cookie Club, 2015). Olivia, Grace, Emma, and Lucy are determined to win Top Cabin as well as rank highest in Chore Score, but when their counselor, Hannah, receives a breakup letter from her boyfriend, the girls rally to support her. They reason that what Hannah needs is a new boyfriend. And what could be better at sparking a summer romance than secret cookies? For their plan to succeed, however, they are going to need everyone's help. Unfortunately, sometimes it is hard to talk to boys, particularly if one of those boys is the crush-worthy Vivek. The story excels in its direct approach to demographics: Olivia is African-American, the daughter of a successful barbecue-sauce magnate; Grace is biracial, white and ethnic Chinese; Emma is a white, Jewish girl from Philadelphia; Lucy is white and not so well-to-do; Vivek is second-generation Indian-American.
— Kirkus Reviews

When Olivia, Grace, Lucy, and Emma return for a second summer at Moonlight Ranch in Arizona, they try to mend their camp counselor Hannah’s love life with cookies. . . . Freeman’s newest covers just the summer, opening with the campers’ arrival and closing on their last day. Told from alternating points of view—the girls in first person, and Hannah in third—this is a cheerful story of Arizona camp life and horseback riding, as well as the girls’ determined matchmaking efforts. The four 10- and 11-year-olds are as different as can be from one another in terms of personalities, strengths, families, and backgrounds (racial, ethnic, and economic), but the bond they’ve developed is strong. Freeman skillfully weaves in events from their first summer together so that readers can begin the series here, but her appealing middle-grade characters are so welldrawn that readers old and new will be eager for more. Recipes included. — Kathleen Isaacs
— Booklist

Martha Freeman worked as a reporter and teacher before becoming a full-time writer of books for young readers, including the Edgar Award­–nominated Zap!, Born Curious, The Secret Cookie Club series, Who Stole Halloween?, and Effie Starr Zook Has One More Question, which School Library Journal called “accessible and exciting” in a starred review. She also collaborated with NASA astronaut Mark Kelly on the Astrotwins books. Martha lives in Colorado. Learn more at MarthaFreeman.com.
or
Not Currently Available for Direct Purchase