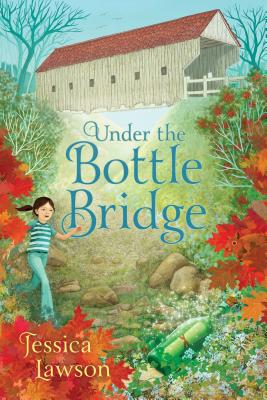 Under the Bottle Bridge

In the tradition of Rooftoppers and Three Times Lucky, critically acclaimed author Jessica Lawson returns with her fourth whimsical, lyrical, and heartfelt middle grade novel about a girl who’s desperately trying to keep her life together, when everything seems to be falling apart.

In the weeks leading up to Gilbreth, New York’s annual AutumnFest, twelve-year-old woodcraft legacy Minna Treat is struggling with looming deadlines, an uncle trying to hide Very Bad News, and a secret personal quest. When she discovers mysterious bottle messages under one of the village’s 300-year-old bridges, she can’t help but wonder who’s leaving them, what they mean, and, most importantly…could the messages be for her?

Along with best friend Crash and a mystery-loving newcomer full of suspicious theories, Minna is determined to discover whether the bottles are miraculously leading her toward long-lost answers she’s been looking for, or drawing her into a disaster of historic proportions.

Praise For Under the Bottle Bridge…

"Lawson creates an engaging cast of characters . . . not every mystery is resolved, but readers will likely still be pleased with the outcome."
— Kirkus Reviews

"Beautifully written, with vivid characters, this exploration of family and friendship shines from the first page...Give to fans of Holly Goldberg Sloan’s Counting By 7s."
— School Library Journal

"Hand this to fans of Turnage’s Three Times Lucky."
— BCCB

"Lawson lovingly creates an unusual community, peoples it with distinctive characters, and intertwines their stories into an involving narrative."
— Booklist Online

"Beautifully written, with vivid characters, this exploration of family and friendship shines from the first page."
— School Library Journal

Jessica Lawson is the author of The Actual & Truthful Adventures of Becky Thatcher, a book that Publishers Weekly called “a delightfully clever debut” in a starred review, and Nooks & Crannies, a Junior Library Guild Selection and recipient of three starred reviews. She is also the author of Waiting for Augusta, Under the Bottle Bridge, and How to Save a Queendom. You can visit her at JessicaLawsonBooks.com.
Loading...
or
Not Currently Available for Direct Purchase