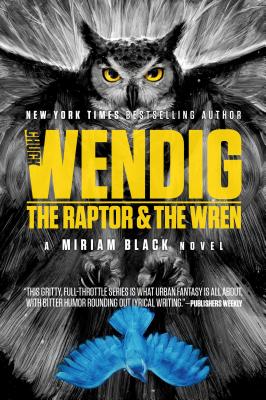 In the fifth book of the “wildly entertaining” (Kirkus Reviews) Miriam Black series, Miriam continues her journey to find answers on how to change her fate and begin to make right some of what she’s done wrong.

Armed with new knowledge that suggests a great sacrifice must be made to change her fate, Miriam continues her quest and learns that she must undo the tragedies of her past to move forward.

One such tragedy is Wren, who is now a teen caught up in a bad relationship with the forces that haunt Miriam and has become a killer, just like Miriam. Black must try to save the girl, but what’s ahead is something she thought impossible…

Chuck Wendig is a novelist, screenwriter, and game designer. He’s the author of many published novels, including but not limited to: Blackbirds, The Blue Blazes, the YA Heartland series, and the New York Times bestselling series Star Wars: Aftermath. He is cowriter of the short film Pandemic and the Emmy Award–nominated digital narrative Collapsus. Wendig has contributed over two million words to the game industry. He is also well known for his profane-yet-practical advice to writers, which he dispenses at his blog, TerribleMinds.com, and through several popular ebooks, including The Kick-Ass Writer, published by Writers Digest. He currently lives in the forests of Pennsyltucky with wife, tiny human, and dog.

Praise For The Raptor & the Wren (Miriam Black #5)…

"Wendig is in top form for his fifth horror-thriller. Wendig expertly splashes Miriam’s considerable emotional pain across the page, never sparing her the price of her gut-wrenching circumstances, and closes with a shocking twist that is a true game-changer."
— , Publishers Weekly
or support indie stores by buying on
Copyright © 2020 American Booksellers Association