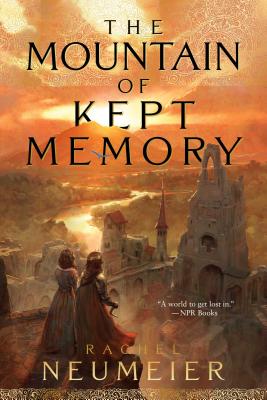 The Mountain of Kept Memory

In this gorgeous fantasy novel that NPR Books called “a world to get lost in,” in the spirit of Guy Gavriel Kay and Robin McKinley, a prince and a princess must work together to save their kingdom from outside invaders…and dangers within.

Long ago the Kieba, last goddess in the world, raised up her mountain in the drylands of Carastind. Ever since then she has dwelled and protected the world from unending plagues and danger…

Gulien Madalin, heir to the throne of Carastind, finds himself more interested in ancient history than the tedious business of government and watching his father rule. But Gulien suspects that his father has offended the Kieba so seriously that she has withdrawn her protection from the kingdom. Worse, he fears that Carastind’s enemies suspect this as well.

Then he learns that he is right. And invasion is imminent.

Meanwhile Gulien’s sister Oressa has focused on what’s important: avoiding the attention of her royal father while keeping track of all the secrets at court. But when she overhears news about the threatened invasion, she’s shocked to discover what her father plans to give away in order to buy peace.

But Carastind’s enemies will not agree to peace at any price. They intend to not only conquer the kingdom, but also cast down the Kieba and steal her power. Now, Gulien and Oressa must decide where their most important loyalties lie, and what price they are willing to pay to protect the Kieba, their home, and the world.

Praise For The Mountain of Kept Memory…

"Give this one to readers who enjoy the dark, dreamlike fantasy of Neil Gaiman."
— SLJ on THE CITY IN THE LAKE

* "It’s the poetic, shimmering language and fascinating unfolding of worlds that elevates this engrossing story beyond its formula...[for] fans of Sharon Shinn’s books."
— Booklist, starred review, on THE CITY IN THE LAKE

"Vivid, satisfying...most compelling is the world and its magical laws, which invite further related stories."
— Publishers Weekly, on THE GRIFFIN MAGE

"This book is like cupped fire, held in the hands: joyful and fierce and precise, painful and true beyond measure. It has the simplicity of poetry, the complexity of myth. I adored it."
— Daniel Fox, author of Dragon in Chains, on GRIFFIN MAGE

Rachel Neumeier, the author of The Mountain of Kept Memory, started writing in graduate school as a break from research, but years ago allowed her hobbies to take over her life. Along with writing both adult and young adult fantasy, she now gardens, cooks Indian food, breeds and shows Cavalier King Charles Spaniels, and occasionally finds time to read. Her most recent young adult novel, The Floating Islands, was a Junior Library Guild selection and was selected by Kirkus Reviews as a best book of the year. Her most recent titles include House of Shadows and Black Dog.
Loading...
or support indie stores by buying on