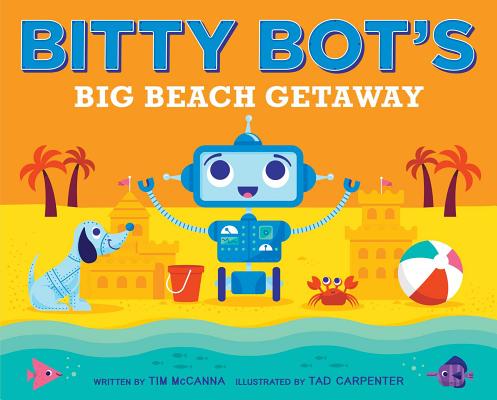 The world’s cutest robot goes on a rhyming, deep-sea adventure with two new friends in this sweet and silly companion to Bitty Bot.

Bitty Bot is back—and he is not excited about his family vacation to Botco Bay. Luckily, new friends make everything better. Bitty Bot and his new pals build a submarine using supplies they find at the beach:

soda cans, a coil of rope,
drainpipe for a periscope.

Off they go on an underwater adventure!

Bitty Bot is back in this beachside companion to his previous, eponymous interstellar adventure (2016). "At the beach in Botco Bay, / robots love to splash and play." But not Bitty Bot—the little robot would rather skip the heat and sand and play back home in Robot City. Bitty's not afraid of water (that's what "rustproof robot oil" is for); it's just that there's no one to play with. Things start to look up when Bitty spots two other unhappy young bots, Clank and Smitty. Bitty mobilizes the pair—along with Bitty's trusty robot-dog and a very amiable crab—to build a submarine for undersea exploration. On its maiden voyage the group sees stingrays, mermaids, giant squids….But when the sub springs a leak, will the quartet make it back to the surface? The cast of characters includes robots of different body types and colors. (Eyelashes suggest gender; none of the three child bots sport them, however.) Unlike the robots, the mermaids (buxom and purple) look mostly homogenous. The parent bots are eerily cheery, unfazed by their children's exploits—possibly suggesting that the children's travels were just make-believe. The rhyming couplets sustain a jaunty pace and playfulness that neatly matches the almost-giddy art style. The warm color palette of the beach and the contrasting cool tones of the robots and underwater scenery make this a good choice for group sharing in storytime. A delightful sea-quel. (Picture book. 3-7)
— Kirkus

In his first outing, Bitty Bot was right in his element—tinkering around with a spaceship and blasting off. But he’s not happy being on the beach at Botco Bay. McCanna reprises his playful, punchy rhymes: “Sun’s too hot and sand’s too gritty. Let’s go back to Robot City,” Bitty laments. Then Bitty—who has a head shaped like a tablet, long and stripy arms, and rolls on two big wheels—meets two robots who are similarly unenthusiastic. They build a submarine from a hodgepodge of materials, including a bench, pliers, soda cans, and “a drainpipe for a periscope,” and take it on an underwater adventure that leads them to a mermaid town. Carpenter fills his playful spreads with jewel tones and expressive robots with clanky, old-fashioned charisma. While most kids enjoy a day at the beach, McCanna offers a generally relatable message about how companionship in tandem with imagination can help make any day better.
— Publishers Weekly

Tad Carpenter is a designer, author, teacher, and illustrator of many books for young readers. The New York Times Book Review raved of his Zoom! Zoom!, “Any child obsessed with trucks or backhoes or trains or steam shovels should get a jolt of pleasure from the vehicular energy on display here.” He lives in Kansas City, Missouri. Visit him online at TadCarpenter.com.
Loading...
or
Not Currently Available for Direct Purchase