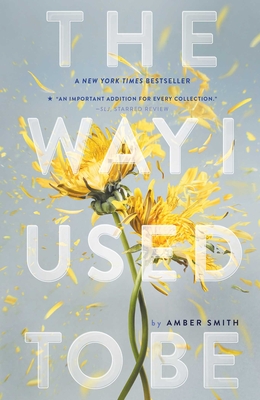 The Way I Used to Be

In the tradition of Speak, this extraordinary debut novel “is a poignant book that realistically looks at the lasting effects of trauma on love, relationships, and life” (School Library Journal, starred review).

Eden was always good at being good. Starting high school didn’t change who she was. But the night her brother’s best friend rapes her, Eden’s world capsizes.

What was once simple, is now complex. What Eden once loved—who she once loved—she now hates. What she thought she knew to be true, is now lies. Nothing makes sense anymore, and she knows she’s supposed to tell someone what happened but she can’t. So she buries it instead. And she buries the way she used to be.

Told in four parts—freshman, sophomore, junior, and senior year—this provocative debut reveals the deep cuts of trauma. But it also demonstrates one young woman’s strength as she navigates the disappointment and unbearable pains of adolescence, of first love and first heartbreak, of friendships broken and rebuilt, all while learning to embrace the power of survival she never knew she had hidden within her heart.

Praise For The Way I Used to Be…

"The Way I Used to Be explores the aftermath of sexual assault with a precision and searing honesty that is often terrifying, sometimes eerily beautiful, and always completely true. It is The Hero's Journey through a distorted circus mirror--one girl's quest to turn desperation into courage, to become a survivor instead of a victim. Amber Smith gets it exactly right."
— Amy Reed, author of BEAUTIFUL and CLEAN

STARRED REVIEW “This is a poignant book that realistically looks at the lasting effects of trauma on love,relationships, and life….Teens will be reminded of Laurie Halse Anderson’s Speak. VERDICT An important addition for every collection.”
— School Library Journal

“A difficult, painful journey, but teens who have experienced rape and abuse will be grateful for this unvarnished and ultimately hopeful portrait. Eden’s shell-shocked narrative is an excellent narrative conduit for what Smith has to say.”
— Booklist

"This is far from a feel-good read, but I can’t implore how necessary it is to read a book like this one . . . As unforgettable and stirring as Laurie Halse Anderson’s Speak, Smith’s provocative debut is best described as a survival story with hope and anger serving as prominent themes so fully explored they simmer off the page."
— The Young Folks

"Readers will root for her as she gathers the courage, at last, to speak up."
— BN Teen blog

"The Way I Used To Be is an intensely gripping and raw look at secrets, silence, speaking out, and survival in the aftermath of a sexual assault. A must-have for every collection that serves teens."
— SLJ / Teen Librarian Toolbox

"Easily one of the hardest books to read on this list. Brutal, raw and emotional… Eden’s story gets told on her terms, in her voice. An honest look at one teen’s struggle to find her way back to herself, to mold herself into the survivor she is."
— FANGIRLISH

"THE WAY I USED TO BE promises to be meaningful, significant, and truly unforgettable."
— FIKTSHUN

"Don't let a book of this magnitude pass you by. Pick it up and read it because Eden's story demands to be read."
— Once Upon a Twilight

"With an achingly beautiful narrative and carefully crafted plot, The Way I Used to Be is more than just an excellent book; it’s an important one."
— NOVEL NOVICE

“Edy’s exploration of the meaning of sexuality and intimacy will be thought provoking for teen readers of various experience levels, and this title is likely to find space alongside [Laurie Halse] Anderson’s Speak."
— BCCB

“A heart-twisting, but ultimately hopeful, exploration of how pain can lead to strength.”
— The Boston Globe

Amber Smith is the New York Times bestselling author of the young adult novels The Way I Used to Be and The Last to Let Go. An advocate for increased awareness of gendered violence, as well as LGBTQ equality, she writes in the hope that her books can help to foster change and spark dialogue surrounding these issues. She grew up in Buffalo, New York, and now lives in Charlotte, North Carolina, with her partner and their ever-growing family of rescued dogs and cats. You can find her online at AmberSmithAuthor.com.
Loading...
or support indie stores by buying on