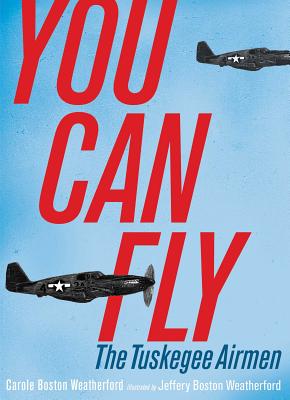 I WANT YOU! says the poster of Uncle Sam. But if you’re a young black man in 1940, he doesn’t want you in the cockpit of a war plane. Yet you are determined not to let that stop your dream of flying.

So when you hear of a civilian pilot training program at Tuskegee Institute, you leap at the chance. Soon you are learning engineering and mechanics, how to communicate in code, how to read a map. At last the day you’ve longed for is here: you are flying!

From training days in Alabama to combat on the front lines in Europe, this is the story of the Tuskegee Airmen, the groundbreaking African-American pilots of World War II. In vibrant second-person poems, Carole Boston Weatherford teams up for the first time with her son, artist Jeffery Weatherford, in a powerful and inspiring book that allows readers to fly, too.

Praise For You Can Fly: The Tuskegee Airmen…

“The narrative voice draws readers into the action, addressing them directly and inviting them to imagine themselves into this ground-breaking role . . . this title is particularly well adapted to classroom use, where language arts and history students can share common air space.”
— BCCB

"This book sheds light on the Tuskegee Airmen through stories filled with authentic voices and hard truths. For those who already know of the Airmen’s accomplishments, the book offers a more personal connection to the men and their ideas and feelings through poems . . . which demonstrate that despite their proven skill and heroism, the aviators were still denied acceptance and respect."
— School Library Journal

“Weatherford’s informative, evocative poems follow the Airmen from the early vision . . . to the flyers’ experiences at home and abroad, with poems about Joe Louis and Lena Horne reminding us that the Airmen were also fighting another war in this country—against prejudice.”
— Horn Book - July/August 2016

"This volume offers a vivid, personal point of view. A welcome addition to traditional books on the Tuskegee Airmen."
— Booklist - April 1, 2015

Jeffery Boston Weatherford created the scratchboard illustrations for You Can Fly using archival World War II photographs as reference. Jeffery studied art at Winston-Salem State University, where he was a Chancellor’s Scholar, and at Howard University, where he earned a Master of Fine Arts.
Loading...
or support indie stores by buying on