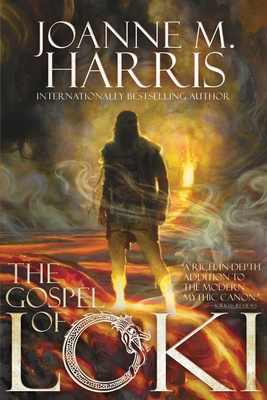 The Gospel of Loki

Using her lifelong passion for the Norse myths, New York Times bestseller Joanne M. Harris has created a vibrant and powerful fantasy novel that the Sunday Sun recommends “to her long-standing audience with wit, style, and obvious enjoyment;” The Sunday Times claims it “lively and fun;” and The Metro adds that “Harris has enormous fun with her antihero...this mythical bad boy should beguile fans of Neil Gaiman.”

"The Gospel of Loki is a charming novel, told with snark, wit and familiarity. Harris’s voice of Loki is an addictive thing, a pleasure to consume. While some may be most familiar with the Norse gods from the Marvel films, Harris draws the characters magnificently from their original inspirations and makes them her own."
— Rob Bedford

Joanne Harris is an Anglo-French author, whose books include fourteen novels, two cookbooks, and many short stories. Her work is extremely diverse, covering aspects of magical realism, suspense, historical fiction, mythology, and fantasy. In 2000, her 1999 novel Chocolat was adapted to the screen, starring Juliette Binoche and Johnny Depp. She is an honorary Fellow of St. Catharine’s College, Cambridge, and in 2013 was awarded an MBE by the Queen. Her hobbies are listed in Who’s Who as “mooching, lounging, strutting, strumming, priest-baiting, and quiet subversion.” She also spends too much time on Twitter, plays flute and bass guitar in a band first formed when she was sixteen, and works from a shed in her garden at her home in Yorkshire.
Loading...
or support indie stores by buying on
(This book is on backorder)