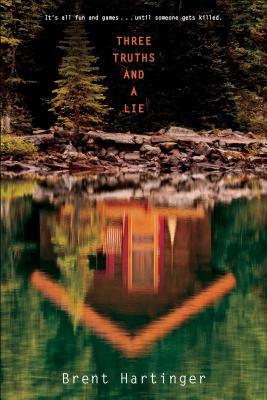 Three Truths and a Lie (Paperback)

A weekend retreat in the woods and an innocent game of three truths and a lie go horribly wrong in this high-octane psychological thriller filled with romantic suspense by Lambda Award–winning author Brent Hartinger.

Deep in the forest, four friends gather for a weekend of fun.

Truth #1: Rob is thrilled about the weekend trip. It’s the perfect time for him to break out of his shell…to be the person he really, really wants to be.

Truth #2: Liam, Rob’s boyfriend, is nothing short of perfect. He’s everything Rob could have wanted. They’re perfect together. Perfect.

Truth #3: Mia has been Liam’s best friend for years…long before Rob came along. They get each other in a way Rob could never, will never, understand.

Truth #4: Galen, Mia’s boyfriend, is sweet, handsome, and incredibly charming. He’s the definition of a Golden Boy…even with the secrets up his sleeve.

One of these truths is a lie…and not everyone will live to find out which one it is.

Brent Hartinger is the award-winning author of a number of novels, mostly for and about teens, including Geography Club (2003) and five companion books, The Last Chance Texaco (2004); Grand & Humble (2006); Project Sweet Life (2008); and Shadow Walkers (2011). A feature film version of his first novel, Geography Club, was released in November 2013, costarring Scott Bakula, Ana Gasteyer, and Nikki Blonsky.
or support indie stores by buying on
Copyright © 2020 American Booksellers Association