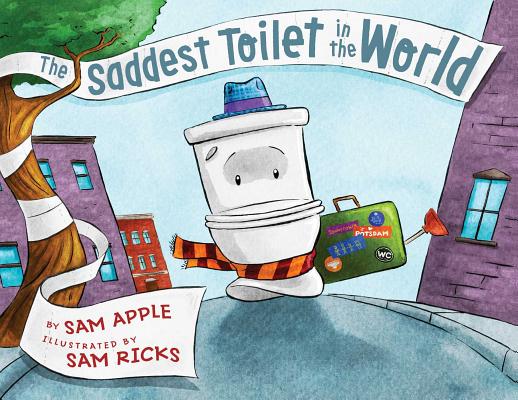 The Saddest Toilet in the World

In a cheeky and hilarious picture book, author Sam Apple and illustrator Sam Ricks share a silly story about the potty-training experience…from the toilet’s point of view!

Danny would sit anywhere and everywhere: a comfy couch, a bean bag chair, his mom’s lap, a playground swing.

The one place Danny wouldn’t sit?

When the pain of rejection becomes too much, the toilet does what any self-respecting toilet would do: He leaves home.

In Sam Apple’s rollicking children’s book debut, with illustrations by Sam Ricks, it’s boy vs. bowl in a hilarious contest of wills.

Praise For The Saddest Toilet in the World…

One of the most creative toilet-training stories ever to make it to print. Danny, like many toddlers before him, is reluctant to touch his tush to the toilet. Understandably wounded by this flagrant rejection, despite Danny’s mother’s assurances, the toilet decides to pack up its things and disappear into the night. When Danny realizes that his throne is gone, he sets out to find it and promises to finally give it a try. Ricks’s hilarious cartoon artwork plays up the humor of a traveling toilet. The final scene shows the triumphant family, toilet in tow, going for a celebratory ride in a roller-coaster car labeled “#2.”
— School Library Journal

A "laugh-out-loud respite from charts, rewards, and accidents. ...Reluctant potty-goers might be encouraged to hit the head after this ridiculous adventure."
— Horn Book

One of the most creative toilet-training stories ever to make it to print. ... Bizarre enough to work its magic.
— School Library Journal

A mashup of toilet humor and self-esteem lit that’s as lemony fresh as a newly scrubbed bowl.
— Publisher's Weekly

A hilarious story of toilet training that will make you laugh out loud!
— Houston Family Magazine

Sam Apple teaches creative writing at the University of Pennsylvania and is the author of American Parent and Schlepping Through the Alps. His work has appeared in The New York Times Magazine, the Financial Times Magazine, and the NewYorker.com, among many other publications. A native Texan, Apple now lives in Philadelphia with his wife, Jennifer, and their three children: Isaac, Lila, and Nina.

Sam Ricks grew up creating stories about toxic fruitcakes and peanut butter–snatching aliens. He is the illustrator of several books for young readers, including The DATA Set series. Sam earned his BA from Brigham Young University and his MA from the University of Baltimore. He is a founding member of Cotopaxi: Gear For Good. He, his wife, and their five children live in Salt Lake City, Utah. Visit Sam at SamRicks.com.
Loading...
or
Not Currently Available for Direct Purchase