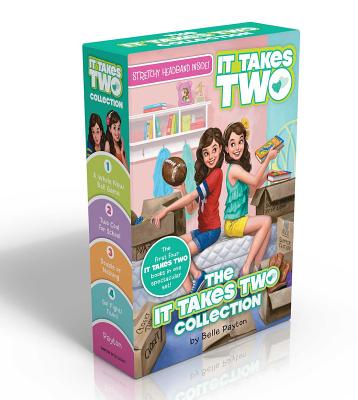 The It Takes Two Collection (Stretchy Headband Inside!)

Get to know twins Alex and Ava and their Texas football family with the first four books of the It Takes Two series!

It’s not just middle school…it’s middle school times two! Twelve-year-old twins Alex and Ava Sackett have just moved from the East Coast to a small Texas town obsessed with football. Their father is the new coach—but that won’t make middle school any easier for these twins! With school elections, football tryouts, and the occasional switching places scheme, Alex and Ava must stick together if they want to take their new school by storm and prove two is much better than one!

This deluxe boxed set includes A Whole New Ball Game, Two Cool for School, Double or Nothing, Go! Fight! Twin!, and a fashionable yet practical stretchy headband both Ava and Alex would appreciate!

Praise For The It Takes Two Collection (Stretchy Headband Inside!): A Whole New Ball Game; Two Cool for School; Double or Nothing; Go! Fight! Twin!…

For A Whole New Ball Game:
"The twin device is effectively deployed as each girl seeks to understand herself independently, in relation to her twin, and in the context of her new town; there's also appeal in the plot's sitcom elements of overheard conversations, secret observations, and all the uncertainty that comes with being a new place."
— The Bulletin of the Center for Children's Books