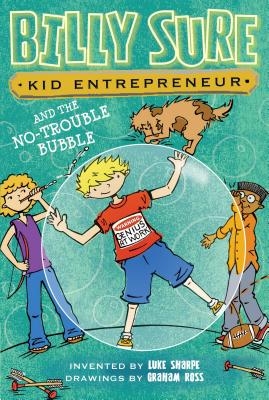 Billy Sure Kid Entrepreneur and the No-Trouble Bubble

Billy Sure, twelve-year-old inventor and CEO of Sure Things, Inc., hosts a competition to find the Next Big Thing in the fifth book of a hilarious middle grade series!

Everyone is talking about Billy Sure, the twelve-year-old genius and millionaire inventor whose inventions have become instant hits. From the All Ball that turns into any sports ball to the Gross-to-Good Powder that makes even the most disgusting foods taste great, Sure Things, Inc. can do no wrong! But what’s next for Billy and his business partner Manny?

They’re looking for a new challenge, and hosting a televised special to find Sure Things, Inc.’s Next Big Thing is just the thing! Thousands of kids pile into the studio to present their invention ideas to Billy. Some are wacky, some are wild, and some have the potential to change the world as we know it.

And the winner is…

Graham Ross has grand plans for world domination through his illustrated inventions. Right now he’s having a “ball” hanging out with Billy Sure, the next sure thing! Graham lives in a little log home in the woods with his inventive family, just outside of Merrickville, Canada.
Loading...
or
Not Currently Available for Direct Purchase