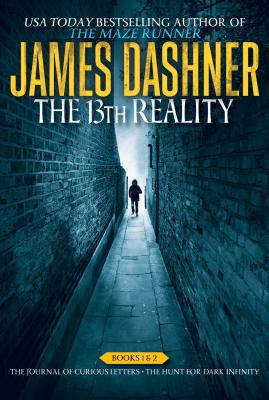 The Journal of Curious Letters; The Hunt for Dark Infinity

From the New York Times bestselling author of The Maze Runner comes the first two action-packed adventures of The 13th Reality series in one exciting edition!

What if every time you made a choice that had a significant consequence, a new, alternate reality was created—the life that would’ve been? What if those new Realities were in danger? What if it were up to you to save all the realities—and in turn, the entire universe?

Atticus Higginbottom, a.k.a. Tick, is living a regular life until the day a strange letter arrives in his mailbox. Postmarked from Alaska and cryptically signed with the initials “M.G.,” the letter informs Tick that dangerous—perhaps even deadly—events have been set in motion that could result in the destruction of reality itself.

Join Tick as he embarks on a series of adventures that cross time and space in the first two books of the acclaimed The 13th Reality series.

James Dashner was born and raised in a small town in Georgia. His love of books and writing made him dream of being an author someday, and he still can’t believe his dream has come true. He is the author of the New York Times bestselling Maze Runner series, the Infinity Ring series, and the 13th Reality series. Visit him online at JamesDashner.com.
Loading...
or
Not Currently Available for Direct Purchase