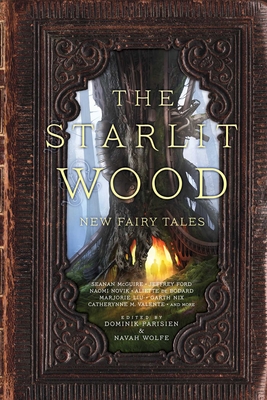 Once upon a time. It’s how so many of our most beloved stories start.

Fairy tales have dominated our cultural imagination for centuries. From the Brothers Grimm to the Countess d’Aulnoy, from Charles Perrault to Hans Christian Anderson, storytellers have crafted all sorts of tales that have always found a place in our hearts.

Now a new generation of storytellers has taken up the mantle that the masters created and shaped their stories into something startling and electrifying.

Packed with award-winning authors, this “fresh, diverse” (Library Journal) anthology explores an array of fairy tales in startling and innovative ways, in genres and settings both traditional and unusual, including science fiction, western, and post-apocalyptic as well as traditional fantasy and contemporary horror.

From the woods to the stars, The Starlit Wood: New Fairy Tales takes readers on a journey at once unexpected and familiar, as a diverse group of writers explore some of our most beloved tales in new ways across genres and styles.

“A classy, smart, and entertaining volume of stories put together with consummate care—and featuring the best and most exciting fantasy writers working in the field today.”
— Jeff VanderMeer, New York Times-bestselling author of the Southern Reach trilogy

"The modern revival of fairy tale fiction for adults began in the 20th century (with the stories of Angela Carter and Tanith Lee), and The Starlit Wood is proof that the revival is still going strong. Editors Parisien and Wolfe have brought a wide range of writers together to blaze new trails through the dark of the woods. Whether you're passionate about fairy tales, like I am, or haven't read them since childhood, I recommend this excellent anthology. I simply loved it."
— Terri Windling, World Fantasy Award-winning editor of the Snow White, Blood Red series

"Lots of strange and wonderful goings-on in The Starlit Wood. Fairy tales you thought you’d left behind in childhood are back in some very poignant, sly and original versions that will touch the Wow in most readers."
— Jonathan Carroll, World Fantasy-Award winning author

"This anthology is consistent throughout, with well-crafted writing and a tantalizing taste of each author’s unique journey into reimagining classic fairy tales for a new audience."
— Booklist

"A rich sample of what awaits us in the world of fairy tales...well worth making time to read."
— Publishers Weekly

"The Starlit Wood, edited by Dominik Parisien & Navah Wolfe is one of the best fantasy compilations of the year."
— Locus Magazine

"If you're a fan of fairy tale retellings, you'll probably want to pick up The Starlit Wood. [It] offers ample delights, both profound and humorous. It's an excellent entry into the retelling tradition, tuned for the current literary moment."
— Locus Magazine

"The table of contents alone reads like a who's who of fantasy authors...Highly recommended."
— F&SF

"An incredible, genre-blurring collection of retold fairy tales, featuring well-published luminaries and up-and-coming voices...Like those oft-told tales of old, The Starlit Wood is a volume readers will want to return to often, and it deserves a place on every bookshelf left wanting a touch of the magical."
— B&N SciFi & Fantasy Blog

"If you were ever fascinated by fairy tales as a child, if you have ever read a fairy tale to a child and watched their face light up, this is an anthology for you."
— The Little Red Reviewer
or support indie stores by buying on
Copyright © 2020 American Booksellers Association