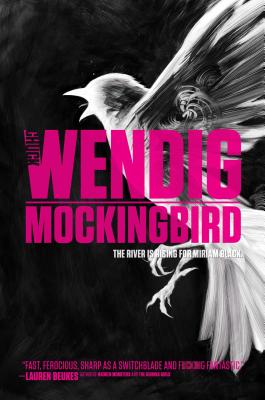 Miriam Black is trying to live an ordinary life, keeping her ability to see how someone dies hidden...until a serial killer crosses her path. This is the second book in the Miriam Black series.

“Visceral and often brutal, this tale vibrates with emotional rawness that helps to paint a bleak, unrelenting picture of life on the edge.” —Publishers Weekly

Miriam is trying. Really, she is. But this whole “settling down thing” just isn’t working out.

She lives on Long Beach Island all year in a run-down, double-wide trailer. She works at a grocery store as a checkout girl. And her relationship with Louis—who’s on the road half the time in his truck—is subject to the mood swings Miriam brings to everything she does. It just isn’t going well.

Still, she’s keeping her psychic ability—to see when and how someone is going to die just by touching them—in check. But even that feels wrong somehow. Like she’s keeping a tornado stopped up in a tiny bottle. Then comes the one bad day that turns it all on her ear.

Chuck Wendig is a novelist, screenwriter and game designer. He's the author of many published novels, including but not limited to: Blackbirds, The Blue Blazes, and the YA Heartland series. He is co-writer of the short film Pandemic and the Emmy-nominated digital narrative Collapsus. Wendig has contributed over two million words to the game industry. He is also well known for his profane-yet-practical advice to writers, which he dispenses at his blog, terribleminds.com, and through several popular e-books, including The Kick-Ass Writer, published by Writers Digest. He currently lives in the forests of Pennsyltucky with wife, tiny human, and red dog.
or
Not Currently Available for Direct Purchase
Copyright © 2020 American Booksellers Association