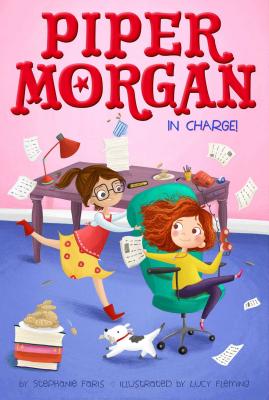 Piper and her mother take on another new adventure in the second book of the brand-new Piper Morgan series.

After saying good-bye to her circus friends, Piper Morgan and her mom are on the move again, this time returning to mom’s hometown and to Piper’s beloved grandmother’s house after Piper’s mom takes a job in the local elementary school principal’s office. Piper is excited for a new school and new friends—and is thrilled when she is made an “office helper.” But there is one girl who seems determined to prove she is a better helper than Piper—and she just so happens to be the principal’s daughter. Can Piper figure out how to handle being the new girl in town once more?

Lucy Fleming has been an avid doodler and bookworm since early childhood. Drawing always seemed like so much fun, but she never dreamed it could be a full-time job! She studied art and practiced drawing every day, and in no time, went on to graduate from the University of Lincoln (UK) with a degree in illustration. She lives and works in a small town in England with her family and a little black cat. When not at her desk she prefers nothing more than to be outdoors in the sunshine with a hot cup of tea.
or
Not Currently Available for Direct Purchase