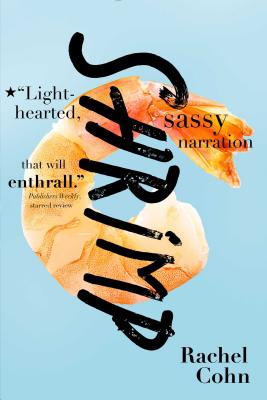 If Cyd Charisse knows one thing, it’s that Shrimp is her true love. Shrimp, the hottest pint-size surfer-artist in San Francisco. That boy (as her mother called him), who was the primary cause of Cyd being grounded to Alcatraz, formerly known as her room. The boy who dumped Cyd before she left home to spend the summer in New York City.

Now it’s the start of senior year. Cyd has changed, but maybe Shrimp has changed too—and maybe Cyd and Shrimp will need to get to know each other all over again to figure out if it’s for real. Can Cyd get back together with Shrimp and keep the peace with her mom? And can she get a life outside of her all-encompassing boy radar?

This sequel to Gingerbread has all the sharp humor and searing attitude of the original, which ELLEgirl praised as “not just Another Teen Novel” and Teen People called “unforgettable.” In Shrimp, Cyd might be a little older and a little wiser, but she’s still the same irrepressible free spirit determined to find her own way in the world, on her own terms.

"Continuing the story begun in Gingerbread, this delightful teen title is funny, poignant, and memorable. Readers will laugh over the pickles Cyd Charisse gets into, and they will nod wisely as they read about the incredible discoveries that she stumbles across."
— Through the Looking Glass Book Review

*"[Cyd Charisse] remains a reassuring counterbalance, a voice that yields to no one in intoxicating style but underpins it with real substance about the last step into adulthood."
— BCCB, starred review

"[Fans] of Cyd's opinionated, rebellious voice, balanced by just the right amount of humanizing vulverability, will drink in this continuation of her story like a caffeine addicts presented with double shots of espresso."
— Horn Book

"Cyd Charisse is a wonderful creation, and fans who enjoyed the first book of her adventures will be eager to read this one."
— KLIATT