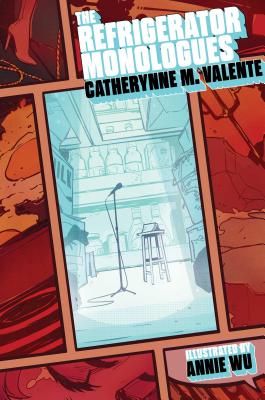 The lives of six female superheroes and the girlfriends of superheroes. A ferocious riff on women in superhero comics

From the New York Times bestselling author Catherynne Valente comes a series of linked stories from the points of view of the wives and girlfriends of superheroes, female heroes, and anyone who’s ever been “refrigerated”: comic book women who are killed, raped, brainwashed, driven mad, disabled, or had their powers taken so that a male superhero’s storyline will progress.

Catherynne M. Valente is the acclaimed author of The Glass Town Game, and a New York Times bestselling author of fantasy and science fiction novels, short stories, and poetry. She has been nominated for the Hugo, Nebula, and World Fantasy awards, and has won the Locus and Andre Norton award. She lives on a small island off the coast of Maine with her partner, two dogs, one enormous cat, a less enormous cat, six chickens, a red accordion, an uncompleted master’s degree, a roomful of yarn, a spinning wheel with ulterior motives, a cupboard of jam and pickles, a bookshelf full of folktales, an industrial torch, and an Oxford English Dictionary. Visit her at CatherynneMValente.com.
Loading...
or support indie stores by buying on