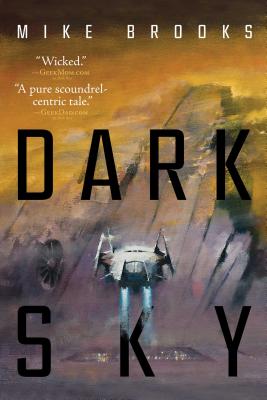 In the sequel to the thrilling Dark Run, which Publishers Weekly called “a terrific debut,” Ichabod Drift and his crew sign on for a new smuggling job that soon goes south when they are separated and caught up in a dangerous civil war.

When Ichabod Drift and the Keiko crew sign on for a new smuggling job to a mining planet, they don’t realize what they are up against. The miners, badly treated for years by the corporation, are staging a rebellion. Split into two groups, one with the authorities and one with the rebels, Drift and his crew support their respective sides in the conflict. But when they are cut off from each other due to a communication blackout, both halves of the crew don’t realize that they have begun fighting themselves…

Mike Brooks is the author of The God-King Chronicles epic fantasy series, the Keiko series of grimy space-opera novels, and various works for Games Workshop’s Black Library imprint including RITES OF PASSAGE and BRUTAL KUNNIN. He was born in Ipswich, Suffolk, and moved to Nottingham to go to university when he was eighteen, where he still lives with his wife, cats, and snakes. He worked in the homelessness sector for fifteen years before going full-time as an author, plays guitar and sings in a punk band, and DJs wherever anyone will tolerate him. He is queer, and partially deaf (no, that occurred naturally, and a long time before the punk band).
Loading...
or support indie stores by buying on