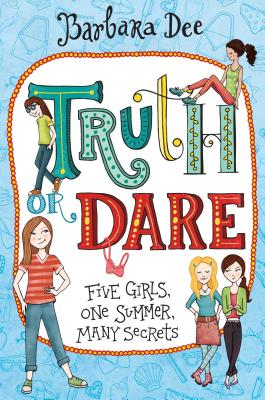 A few white lies during a simple game of truth or dare spin out of control and make life very complicated for Lia in this “entertaining bibliotherapy” (Kirkus Reviews) from Barbara Dee.

When Lia returns after a summer with her eccentric aunt, it feels like everything has changed within her group of five friends. Everyone just seems more…dramatic. And after playing a game of Truth or Dare, Lia discovers how those divides are growing wider, and tells a few white lies about what really happened over the summer in order to “keep up.” But is “keeping up” with her BFFs really worth it?

Barbara Dee is the author of twelve middle grade novels including Violets Are Blue, Haven Jacobs Saves the Planet, My Life in the Fish Tank, Maybe He Just Likes You, Everything I Know About You, Halfway Normal, and Star-Crossed. Her books have earned several starred reviews and have been named to many best-of lists, including The Washington Post’s Best Children’s Books, the ALA Notable Children’s Books, the ALA Rise: A Feminist Book Project List, the NCSS-CBC Notable Social Studies Trade Books for Young People, and the ALA Rainbow List Top Ten. Barbara lives with her family, including a naughty cat named Luna and a sweet rescue hound named Ripley, in Westchester County, New York.
Loading...
or support indie stores by buying on
(This book is on backorder)