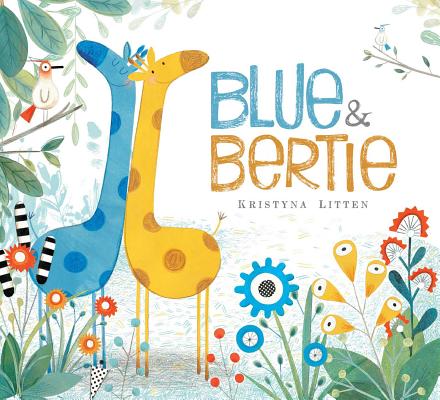 “A deceptively simple story that celebrates individuality, acceptance, and friendship….Litten’s message [is] about the value of breaking outside of one’s comfort zone—and getting to know people who don’t look exactly like you.” —Publishers Weekly

“The simple artwork is expressive and engaging….A sweet, empowering tale to share one-on-one or in a story time.”—School Library Journal

“Aside from offering a satisfying friendship story, this book celebrates differences and shows how enriching diversity can be.” —Booklist

A charming picture book about a lost giraffe and his new friend who helps him find his way home and see the world from a new perspective.

Bertie the giraffe’s life is very simple and predictable: every day, he and his herd nibble leaves, sip water, and nap. But one day, Bertie oversleeps and wakes up lost and alone. Well, not quite alone—he meets Blue, a lonely blue giraffe who offers to show him the way home. On the way, Blue has a lot to show his new friend about the wonders of the world that Bertie had never noticed before. But when Bertie gets home, will his herd welcome Blue, even though he is different?

Mismatched animalswho become friends are a common theme in picture books, and this one is visualproof that a real friend is "true blue." Every day is the same forBertie and the other yellow giraffes. They nibble leaves from the treetops, drinkcooling water at the water hole, and then snooze. That is, until the day whenBertie oversleeps and wakes up alone. Without the rest of the tower, he islost. How will he find his way home? Just as he starts to cry, a shy creaturesteps forward—he's just like Bertie, only blue! Not only does Blue show him theway home, but he draws Bertie's attention to all kinds of unnoticed things,like rare flowers. Best of all, the other yellow giraffes love Blue, and fromthen on they all see things a little bit differently each day. Sound effects("crunchity-crunch," "sip, slurp," "trit trot")pepper the text, adding some liveliness. The giraffes are depicted with brown(or blue) polka dots and spindly legs, and the stylized flora in the backgroundadds to the whimsy. One fanciful image shows the sleeping giraffes with theirnecks curled in loops; another, tall, vertical spread underscores the giraffes'long necks. The theme of feeling different and finding a friend is predictablehere, but kids will enjoy the colorful illustrations and laid-back delivery. Agentle story with a sweet message that doesn't hit readers over the head.(Picture book. 4-7)
— Kirkus Reviews

Litten(Bike On, Bear!) delivers a deceptively simple story that celebratesindividuality, acceptance, and friendship. Bertie and his fellow giraffes—withtheir long necks and rounded bodies, they almost look like a row of eighthnotes or soup ladles as they nibble leaves from tall trees—follow the sameschedule every day. Having overslept one morning, Bertie wakes up alone andlost, fretting about how he’ll find his herd, until he encounters a giraffe“who was just like him—except he was blue!” (Bertie and his brethren are yellow.)As they travel together, Blue shows Bertie a world of vivid flowers, unfamiliarbirds, and a rushing herd of zebras, sights he’s never seen before. AfterBertie rejoins his herd, Blue (who fears he won’t belong) is instead accepted“just the way he was.” Closing scenes that show the giraffes amid the colorfulbirds and flowers Bertie previously discovered underscore Litten’s messageabout the value of breaking outside of one’s comfort zone—and getting to knowpeople who don’t look exactly like you. Ages 4–8.
— Publishers Weekly

Bertie is indistinguishable from the other yellow, spotted giraffes, both in appearance and behavior. His existence is so routine that he panics when he finds himself alone and having to make decisions on his own. “What should I do?” he says as he paces around a rock. A blue giraffe sees Bertie and offers to show him the way home. But Blue introduces Bertie to far more than the path home. He teaches him about birds and rare flowers that live among them, and he encourages him to feel free. In return, Bertie gives Blue friendship and a home where he can feel accepted, even though he stands out from the herd. The simple artwork is expressive and engaging. The text, which rhymes at times, adds emotion and heart to characters who are already brimming with personality. VERDICT A sweet, empowering story to share one-on-one or in a story time. Kids will embrace Bertie and Blue.
— School Library Journal

Bertie the giraffe has a predictable but happy life. Each day he and his herd nibble leaves from trees (

crunchity-crunch), drink from the watering hole (sip, slurp), and curl up for a nap (snore, snore). One day,

though, Bertie oversleeps and wakes up to find his herd has moved on without him. Lost and alone, Bertie

wanders through some woods where he encounters another giraffe—“just like him, only he is blue.”

Acting as guide, Blue leads Bertie through the wilderness back to his herd, pointing out many wonders

along the way—a beautiful flower, galloping zebras, colorful birds. Bertie is amazed by it all and invites

his new friend to join the herd. Not only do they accept Blue, their lives are made better by all the new

things Blue has to share. Litten’s sweet illustrations make good use of white space and vibrant color, and

the giraffes’ faces are wonderfully expressive. Aside from offering a satisfying friendship story, this book

celebrates differences and shows how enriching diversity can be.
— Booklist online

Kristyna studied Illustration at Edinburgh College of Art and graduated in 2010. She now lives in a beautiful village in Yorkshire. Her first picture book, Flint's Odd Socks, followed by Chickens Can't See In The Dark were highly commended for the Macmillan Prize two years running. Kristyna has written and illustrated the brilliant Blue & Bertie and Norton & Alpha for Simon & Schuster, and the stunning Ziggy and the Moonlight Show will publish in 2018.


Kristyna studied Illustration at Edinburgh College of Art and graduated in 2010. She now lives in a beautiful village in Yorkshire. Her first picture book, Flint's Odd Socks, followed by Chickens Can't See In The Dark were highly commended for the Macmillan Prize two years running. Kristyna has written and illustrated the brilliant Blue & Bertie and Norton & Alpha for Simon & Schuster, and the stunning Ziggy and the Moonlight Show will publish in 2018.