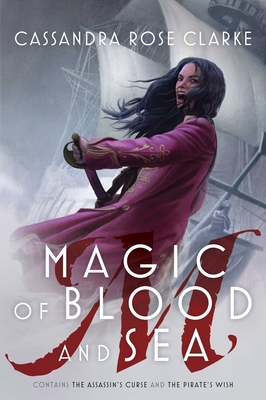 Magic of Blood and Sea

The Assassin's Curse; The Pirate's Wish

A pirate princess and a cursed assassin find their fates intertwined in this gorgeous and thrilling adventure.

Ananna of the Tanarau abandons ship when her parents try to marry her off to an ally pirate clan. She wants to captain her own boat, not serve as second-in-command to a handsome and clueless man. But her escape has dire consequences when she learns that her fiancé’s clan has sent an assassin after her.

And when this assassin, Naji, finally finds her, things get even worse. Ananna inadvertently triggers a nasty curse—with a life-altering result. Now, Ananna and Naji are forced to become uneasy allies as they work to complete three impossible tasks that will cure the curse.

Unfortunately, Naji has enemies from the shadowy world known as the Mists, and Ananna must face the repercussions of betraying her engagement that set her off on her adventures. Together, the two must break the curse, escape their enemies, and come to terms with their growing romantic attraction.

Praise For Magic of Blood and Sea: The Assassin's Curse; The Pirate's Wish…

* “Harkens back to the best in fantasy/adventure, offering rock-solid worldbuilding, satisfyingly perilous obstacles and a protagonist whose charismatic ’tude goes way beyond spunk.”
— Kirkus Reviews, starred review, on THE ASSASSIN'S CURSE

“Unique, heart-wrenching, full of mysteries and twists!”
— Tamora Pierce, author of the Song of the Lioness quartet, on THE ASSASSIN'S CURSE

"An enjoying, compelling read with a strong and competent narrator … a highly satisfying adventure.”
— SFX Magazine, on THE ASSASSIN'S CURSE

“Exciting and original...with magic, pirates, myth and adventure, The Assassin’s Curse will hook you in and keep you tugging on the line for the next book in Clarke’s series.”
— USA Today, on THE ASSASSIN'S CURSE

Cassandra Rose Clarke is the author of Our Lady of the Ice, Magic of Blood and Sea, Magic of Wind and Mist, Star’s End, Halo: Battle Born, and Halo: Meridian Divide. She grew up in south Texas and currently lives in a suburb of Houston, where she writes and teaches composition at a local college. Cassandra’s first adult novel, The Mad Scientist’s Daughter, was a finalist for the 2013 Philip K. Dick Award, and her YA novel, The Assassin’s Curse, was nominated for YALSA’s 2014 Best Fiction for Young Adults. Her short fiction has appeared in Strange Horizons and Daily Science Fiction. Visit her at CassandraRoseClarke.com.
Loading...
or support indie stores by buying on