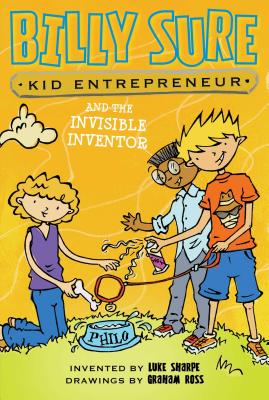 Billy Sure Kid Entrepreneur and the Invisible Inventor

Billy Sure, inventor and CEO of Sure Things, Inc., is in a race to finish his invisibility spray before another inventor gets all the glory in the eighth book of a hilarious middle grade series!

Everyone is talking about Billy Sure, the boy genius and millionaire inventor whose inventions have become instant hits. From the All Ball that turns into any sports ball to his hovercraft, Sure Things, Inc. can do no wrong! Now Billy wants to help other kids achieve their inventing dreams, so he solicits and selects new ideas to develop.

Billy has been working on an invisibility invention for years—but it isn’t quite right yet. Now suddenly there’s a new inventor on the scene who claims to have developed it first. But it might not be all it’s cracked up to be. Will Billy’s dream of creating the world’s first invisibility spray disappear?

Find out in this wacky story with funny black-and-white illustrations throughout.

Graham Ross has grand plans for world domination through his illustrated inventions. Right now he’s having a “ball” hanging out with Billy Sure, the next sure thing! Graham lives in a little log home in the woods with his inventive family, just outside of Merrickville, Canada.
Loading...
or support indie stores by buying on